Written by Katharine Lee Bates and composed by Samuel A. Ward, “America the Beautiful” is one of the most well-known and beloved American patriotic songs. The song celebrates the natural beauty and the “patriot dream” of the United States.

Hillsdale College is an independent institution of higher learning founded in 1844 by men and women “grateful to God for the inestimable blessings” resulting from civil and religious liberty and “believing that the diffusion of learning is essential to the perpetuity of these blessings.”

From the Declaration of Independence

When, in the Course of human events, it becomes necessary for one people to dissolve the political bands which have connected them with another, and to assume among the powers of the earth, the separate and equal station to which the Laws of Nature and of Nature’s God entitle them, a decent respect to the opinions of mankind requires that they should declare the causes which impel them to the separation.

We hold these truths to be self-evident, that all men are created equal, that they are endowed by their Creator with certain unalienable Rights, that among these are Life, Liberty, and the pursuit of Happiness. –That to secure these rights, Governments are instituted among Men, deriving their just powers from the consent of the governed, –That whenever any Form of Government becomes destructive of these ends, it is the Right of the People to alter or to abolish it, and to institute new Government, laying its foundation on such principles, and organizing its powers in such form, as to them shall seem most likely to effect their Safety and Happiness. 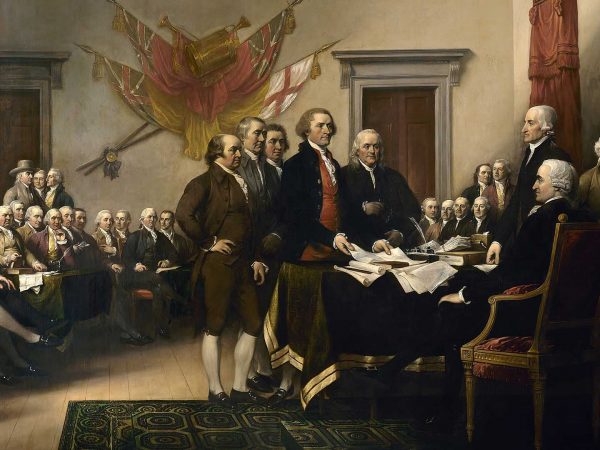 From the Declaration of Independence (continued)

…When a long train of abuses and usurpations, pursuing invariably the same Object, evinces a design to reduce [a people] under absolute Despotism, it is their right, it is their duty, to throw off such Government, and to provide new Guards for their future security.

We, therefore, the Representatives of the United States of America, in General Congress, Assembled, appealing to the Supreme Judge of the world for the rectitude of our intentions, do, in the Name, and by Authority of the good People of these Colonies, solemnly publish and declare, That these United Colonies are, and of Right ought to be, Free and Independent States, that they are Absolved from all Allegiance to the British Crown, and that all political connection between them and the State of Great Britain, is and ought to be totally dissolved; and that as Free and Independent States, they have full Power to levy War, conclude Peace, contract Alliances, establish Commerce, and to do all other Acts and Things which Independent States may of right do. And for the support of this Declaration, with a firm reliance on the protection of Divine Providence, we mutually pledge to each other our Lives, our Fortunes, and our sacred Honor. 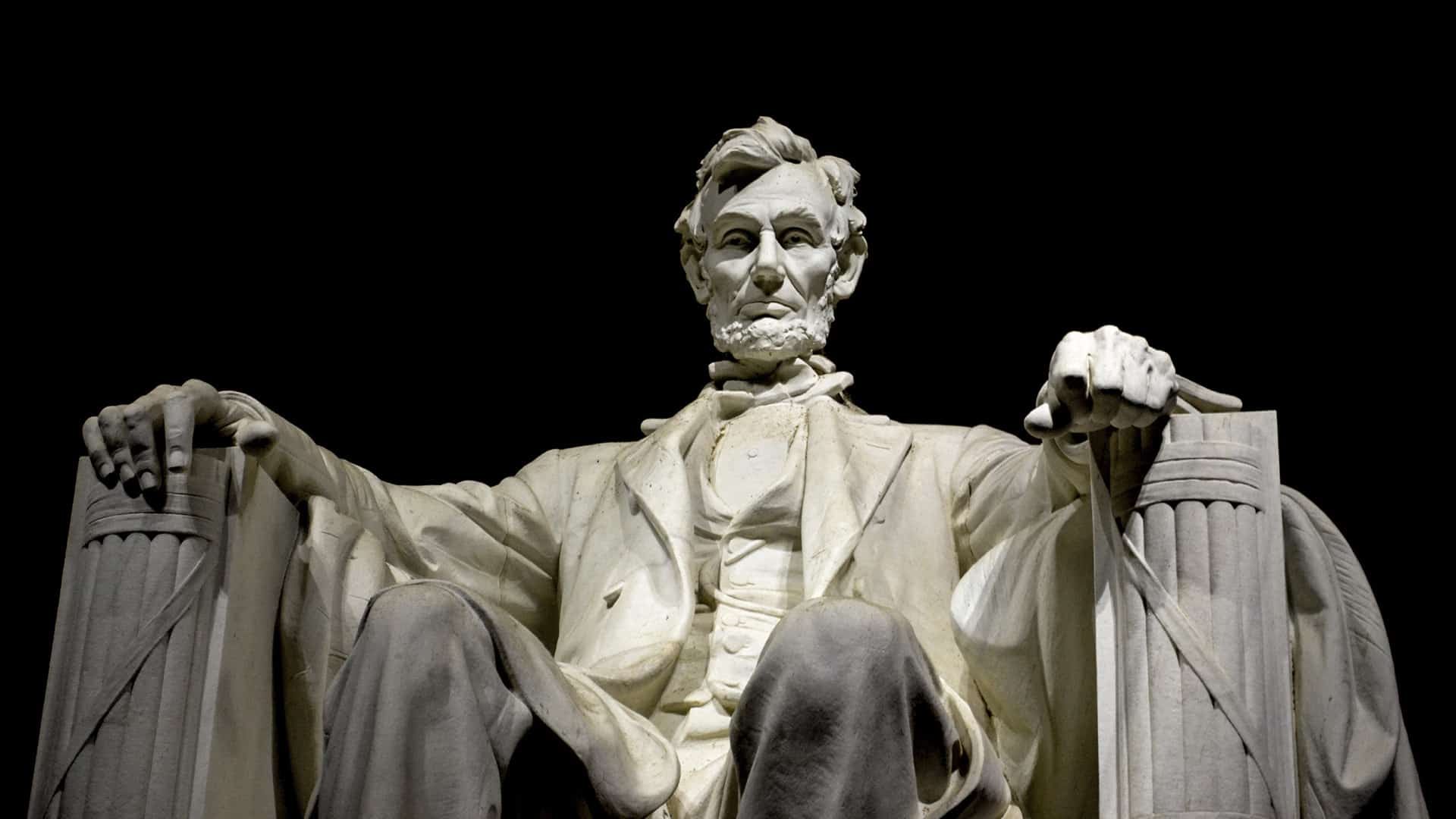 We hold this annual celebration, [sometime about the 4th of July], to remind ourselves of all the good done in this process of time, of how it was done, and who did it, and how we are historically connected with it; and we go from these meetings in better humor with ourselves—we feel more attached the one to the other, and more firmly bound to the country we inhabit…. But after we have done all this we have not yet reached the whole.

There is something else connected with it. We have besides these men—descended by blood from our ancestors—among us perhaps half our people who are not descendants at all of these men…. If they look back through this history to trace their connection with those days by blood, they find they have none, they cannot carry themselves back into that glorious epoch and make themselves feel that they are part of us, but when they look through that old Declaration of Independence, they find that those old men say that “We hold these truths to be self-evident, that all men are created equal,” and then they feel that that moral sentiment taught in that day evidences their relation to those men, that it is the father of all moral principle in them, and that they have a right to claim it as though they were blood of the blood, and flesh of the flesh, of the men who wrote that Declaration, and so they are. That is the electric cord in that Declaration that links the hearts of patriotic and liberty-loving men together, that will link those patriotic hearts as long as the love of freedom exists in the minds of men throughout the world. 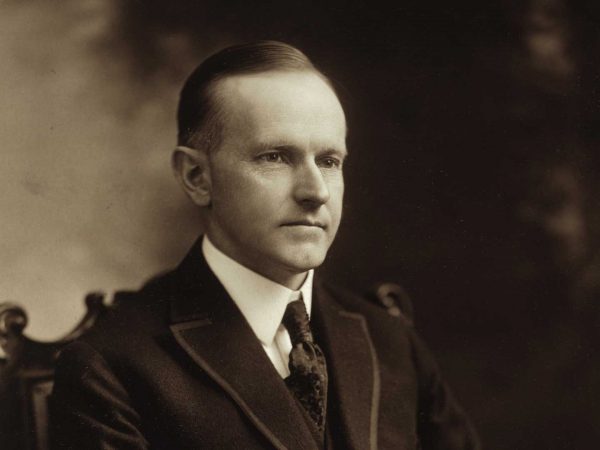 From a Speech by Calvin Coolidge at Philadelphia, July 5, 1926

About the Declaration there is a finality that is exceedingly restful. It is often asserted that the world has made a great deal of progress since 1776, that we have had new thoughts and new experiences, which have given us a great advance over the people of that day, and that we may therefore very well discard their conclusions for something more modern. But that reasoning cannot be applied to this great charter.

If all men are created equal, that is final. If they are endowed with inalienable rights, that is final. If governments derive their just powers from the consent of the governed, that is final. No advance, no progress, can be made beyond these propositions. If anyone wishes to deny their truth or their soundness, the only direction in which he can proceed historically is not forward, but backward, toward the time when there was no equality, no rights of the individual, no rule of the people. Those who wish to proceed in that direction can not lay claim to progress. They are reactionary. Their ideas are not more modern, but more ancient, than those of the Revolutionary fathers. 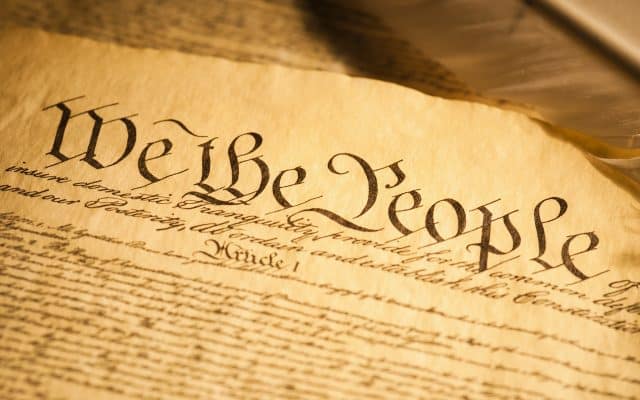 As part of its nationwide educational outreach, Hillsdale College has distributed more than 4.5 million copies of its Pocket Constitution, containing the complete text of the Declaration of Independence and the Constitution.

Get Your Free Pocket Constitution 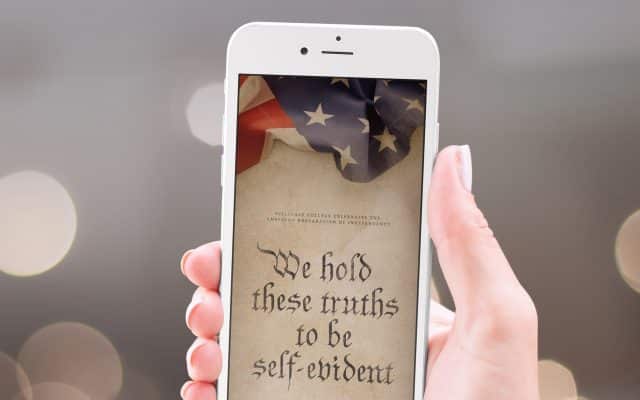 With the War for Independence over a year old, the Continental Congress appointed a Committee of Five to draft a document “declaring the causes which impel the American colonies to the separation.” The committee submitted its draft to Congress on June 28, 1776, and on July 2, Congress voted for independence. Two days later, after numerous edits, Congress approved the Declaration of Independence by unanimous vote. 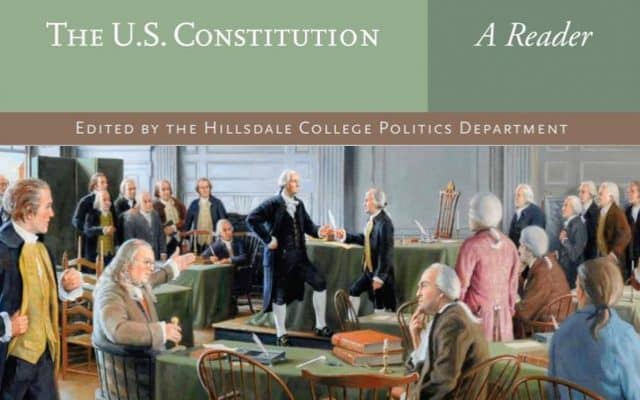 Published by Hillsdale College Press, this invaluable 790-page book contains 113 historic primary source documents with introductions from Hillsdale’s Politics faculty. It is a vital resource for any serious constitutional scholar.

Get Your Copy of The U.S. Constitution: A Reader

The Declaration of Independence was drafted by Thomas Jefferson, who completed it in a mere seventeen days. Submitted to the Continental Congress on June 28, 1776, it was approved by unanimous vote on July 4, 1776. 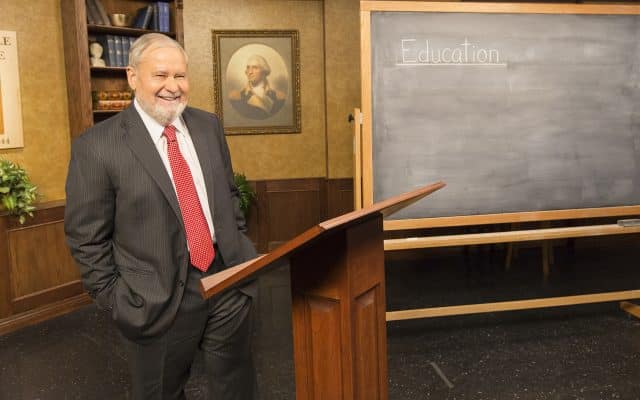