Frederick Douglass was a runaway slave who became one of America’s greatest orators and writers, a lifelong champion of the principles of the Declaration of Independence, and a friend of presidents. Douglass visited Hillsdale College—an anti-slavery college whose 1844 charter committed it to accept students “without regard to race, sex, or national origin”—in the midst of the Civil War. On January 21, 1863, he delivered a speech titled “Popular Error and Unpopular Truth.” During this visit, Douglass posed for a photo (featured here) that would later be used for his visiting card and is reported to have been his favorite. The photo was located and purchased by Hillsdale College in 2004. Douglass spoke again at Hillsdale in 1888. 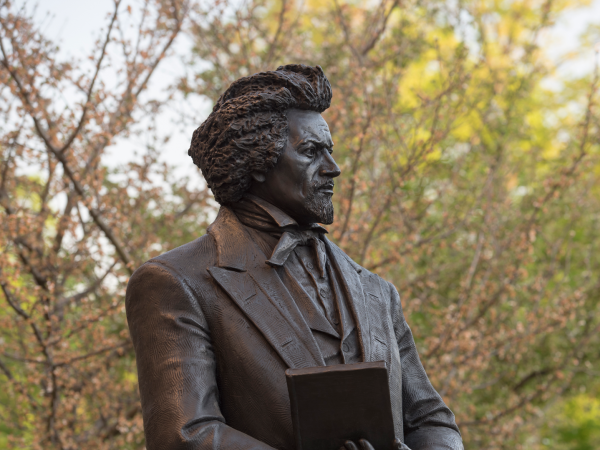 More than 150 years after Frederick Douglass delivered the address “Popular Error and Unpopular Truth” at Hillsdale College, the famed abolitionist has become a permanent figure on campus. On May 12, the College unveiled its latest bronze statue, a 7-foot-8-inch likeness of Frederick Douglass, in front of a crowd of more than 300 people.

The Douglass statue is the eighth to be included in Hillsdale’s Liberty Walk. It stands opposite the College’s statue of Abraham Lincoln and joins the likes of George Washington and Thomas Jefferson from the Founding Era, and Ronald Reagan, Margaret Thatcher, and Winston Churchill from more recent history. Designed and created by San Francisco sculptor Bruce Wolfe, the statue depicts Douglass as a scholar carrying a book under his arm.

After the unveiling, Dr. Lucas Morel, professor of politics at Washington and Lee University, addressed the crowd. He spoke on the impact of Douglass’ life and thought, highlighting the abolitionist’s extraordinary loyalty to his country. According to Dr. Morel, although Douglass could have easily rejected America after being born into slavery, he chose instead to dedicate his life to the nation by advocating for freedom and justice. Morel also discussed Douglass’ dedication to the study of the Constitution, the Declaration of Independence, and the Bible.

For an excerpt of Morel’s speech, follow the link below. 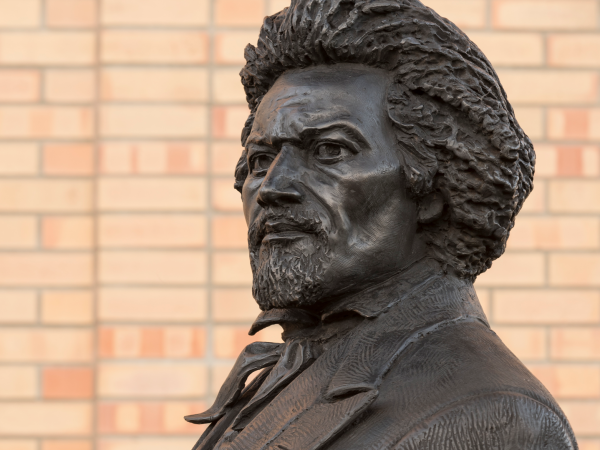 On the Frederick Douglass Statue and Its Placement

“Douglass looks with resolve at the soldier who paid the price. Lincoln looks at the soldier with solemnity, almost sadness, because, of course, he was the man that gave the command that led to the last full measure of devotion. Douglass came here to remind us what a college is. It’s not just a proclamation of the evil of slavery. It’s a proclamation on the nature of man—of all of us, of what we can do, of what we’re made for.”

– Larry P. Arnn, President of Hillsdale College, from his remarks at the unveiling of the Frederick Douglass statue