The Long Road to Victory

With only 54 men, Niedfeldt is one of the smaller dorms on campus. But we were determined to show our talent and dorm loyalty at this year’s Homecoming festivities. In every competition, from Banner Drop to the photo contest to volunteer hours, we fought tooth and nail, but Mock Rock, the annual dance competition, was always the final destination.

Mock Rock is the crown jewel of Hillsdale’s Homecoming. Teams from each dorm, fraternities, sororities, and even private teams perform choreographed dance numbers in front of faculty judges, intent on winning glory and the coveted Homecoming trophy.

“For me, Mock Rock is all about team-building,” explained Niedfeldt head resident assistant Ryan Perkins, ’22. “It’s a way for us as dorms to foster community through competition. None of us guys actually know how to dance, but that’s the fun of it. And throughout the weeks we spend preparing for Mock Rock, we build strong friendships with everyone in the dorm. Every year, Mock Rock is something that guys look back on as one of their favorite dorm memories.”

As a small dorm, we knew we would have an uphill battle. Simpson, the largest dorm on campus, had won for eight of the last nine years. However, we were determined to make up what we lacked in numbers with zeal and effort. Night after night for two weeks, all 36 volunteers worked through choreography, practiced stunts, and refined their dancing skills for an hour or more at a time, giving up valuable social and study time, as we worked toward victory.

“I love how whoever is dancing is willing to sacrifice their time and energy to perfect it and how enthusiastic everyone is about it,” said Charlie Miggins, ’25, the day before the competition. “I love how much anticipation there is.”

On the day of the competition, we walked together to the Roche Sports Complex, excited but nervous. Niedfeldt had never won Mock Rock before, but we all hoped this would be our year. Sitting together in the back of the gym, we watched each team’s performance carefully. The competition was stiff. When the time came for us to take the floor under the lights, we were focused and ready.

Our performance went without a hitch. Stunt after stunt flowed seamlessly from the choreography, including flips and rolls. The crowning moment came when we recreated the scene of Washington crossing the Delaware, complete with Niedfeldt resident assistant Shane O’Grady, ’22, being carried in costume as Washington while two dozen men simulated a wave. The crowd was cheering so loudly that we couldn’t hear the music. As we jogged off the court to a standing ovation, only one thought filled our minds: Was it enough?

Finally the top three teams were announced. In third place: Team Dob. In second place: Whit-Wat-Way. In first place: Niedfeldt. We were ecstatic as we rushed the court, running a victory lap with our dorm flag.

That night, we celebrated our victory with friends from across campus, enjoying a fun night of ice cream, fruit punch, karaoke, and dancing. Our hard work had paid off, and we all knew we had earned it. With Homecoming now over, we all prepared to jump back into classes on Monday, but in the back of our minds, we were already looking forward to next year.

In the words of Niedfeldt House Director Colton Duncan, ’23, “Every year I tell Niedfeldters they are faced with a decision, because Mock Rock requires sacrifice and hardship. And every year they choose right, because here at Niedfeldt, we know that we are not made for comfort but for greatness.” This year, we did our duty and made Phyllis Niedfeldt proud. 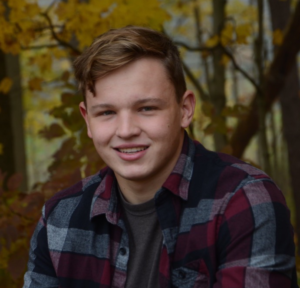 Liam Martin, ‘25, is a native of rural Ohio and plans to major in History. In his free time, he enjoys coffee, Shakespeare, Latin chant, and debating politics and religion with whoever will listen.