A Conversation with Writer Mark Richard

When I met Mark Richard before our video interview, he said he didn’t remember names as well as he remembered faces. I noticed this throughout his visit. He saw me at his workshop, readings, and reception, and greeted me with a warm, “Hey man.”

I was ecstatic to have Mark Richard refer to me in such a friendly manner, though I suspected it was because he couldn’t recall my name. That was just fine. His visit bombarded him with new names, and he will never hear most of those names again. But the point of his visit was not for him to remember the students, but for the students to learn from him.

In our interview, Mr. Richard told a story about his own time as an undergraduate learning from a visiting writer. He attended Washington and Lee University as an undergraduate, and, like Hillsdale, Washington and Lee brought writers to read their work and teach students. Mr. Richard listed half a dozen writers I had never heard of, but I knew of Walker Percy, one of America’s greatest writers. Percy came to Mr. Richard’s creative writing class on the day the class read one of Mr. Richard’s short stories. He told Mr. Richard that he liked one detail in the story. Thirty years later, Mr. Richard still remembers that minute detail, that short interaction with an American legend, but he knows Walker Percy forgot about him shortly after he left campus.

He understood that his visit was essentially for the students. He volunteered his time so that someone might have a similar experience to what he had with Walker Percy. In thirty years, Hillsdale students might remember their own brief conversations with Mark Richard, but Mr. Richard probably won’t remember them — and that’s okay.

His visit—and our Visiting Writers Program as a whole—continues that tradition of learning and teaching the art of writing. Mark Richard remembers Walker Percy, Percy remembered William Faulkner, Faulkner remembered James Joyce, and so on, stretching back hundreds of years. It’s important to read these authors, but seeing them in the flesh reminds us that they once were in our position: young and hungry to write.

When I approached him to sign my copies of his books, he smiled, nodded, and said, “Hey man.” I’m still not sure if he remembered my name, but I won’t forget my brief time with Mark Richard. 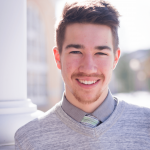