A classics and English double-major, Rachelle Ferguson, ’17, is already a published playwright. Next January, her classics side will take the stage as she presents a paper on Virgil’s Eclogues at a Society for Classical Studies conference.

Rachelle spent a semester working on her paper, which started out as an assignment for a seminar on Latin literature with Dr. Jones. As she read Virgil’s Eclogues in their original Latin, several images and motifs stood out to her. In particular, she noticed that the word “shade”—umbra in Latin—was often repeated, sometimes in an ominous way. “Shade is a quintessential image,” Rachelle said. “The collection ends with one of the shepherds saying, ‘Let’s move. The night is coming. The shade is coming. The shade is harmful.’ It struck me as odd and made me want to look into it further.” As Rachelle examined the text further, a fundamental question emerged: How could a simple image contain such doubleness and ambiguity? Her curiosity drove her to look not only within the Eclogues but also outside the text for answers.

Over Thanksgiving break last year, Rachelle did extensive research into previous literary criticisms of the Eclogues before beginning her own work. Though some scholars see Virgil’s depiction of shadows as neutral or even positive, Rachelle saw it as more complicated. “I tried to find a middle ground in my paper. It kind of goes hand-in-hand with his attraction to Epicureanism,” she said. “He’s drawn to this pastoral world, a sort of poetic ideal.” In other words, Virgil’s shadows present a pleasantly shady pastoral world, but also highlight the danger of isolating oneself in this world and forgetting what’s really important. Rachelle’s thesis emerged as a way to explain the tension between Virgil’s poetic idealism and his realism. An ideal world would be a beautiful thing, but life is full of shadows.

The Eclogues’ shadows, Rachelle argued, reflect the tension between what life could be and what it often is. According to Rachelle, “The image of shade is a quintessential representation of this whole pastoral world of shepherds and what Virgil thinks is the pastoral world.” Ultimately, Rachelle’s thesis grew from simple observation of a literary tension into an analysis of its lessons. She realized that in penning the Eclogues, Virgil was speaking wisdom into the lives of his readers. We all want peace and happiness in life, but sometimes we must sacrifice perfect peace in order to interact with the world around us. “We can see Virgil’s presentations of shade sometimes in positive lights, sometimes in negative, and that’s how he used the pastoral itself,” she said. “There’s a sense of leisure and peace, but there’s still urban life. He doesn’t want us to just seclude ourselves in an isolation that doesn’t recognize the bigger picture.”

Rachelle presented her finished product this past April at the national Eta Sigma Phi classics honorary convention for undergraduates. Next January’s Society for Classical Studies conference is comprised mostly of graduate student and professor presentations. Rachelle will be presenting the paper again, this time as part of the conference’s only undergraduate panel. In terms of preparation, she’s been reviewing her paper and re-reading Virgil. At the conference, she will read her paper aloud, distribute handouts with passages in side-by-side Latin and English, and then take any questions. “It’s a little scary,” she laughed.

When asked how Virgil’s ideas can apply to Hillsdale students, Rachelle compared being in college to four years of pleasant seclusion in the shade. Life at Hillsdale is delightful, but “eventually, we do need to face the world.” Our experience here is in many ways a shady retreat as we prepare for life’s darker shadows. 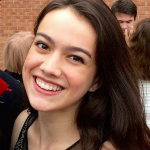