Mapping the Music of the Mind

Dr. Knecht, professor of music and a viola instructor, began researching musical expertise and cognition—how music affects the mind—while working for her undergraduate degree at the University of Michigan. After a ten-year research investigation, she has published a book of musical exercises that aim to improve music cognition and help advancing string musicians develop their musical mental maps.

Dr. Knecht found that musicians don’t have some sort of mental machinery that makes them experts. In her research, she came to the conclusion that musicians recognize patterns they can “map onto” when they hear music.

“Expert musicians think of hundreds of things to play. Every note has lots of things that you’re thinking about,” she says. “There’s tons of things to think about to be an orchestral musician. A novice would overload their memory. It’s all how music is organized. It doesn’t take any mental storage.”

For Dr. Knecht, this means to excel at music, a musician must figure out how to most effectively access his or her mental map.

“There’s always a mystery of music being something that requires you to be born in a certain environment,” she says. “You have to practice ten thousand hours to be an expert, they say, but even then you have to be able to have a mental map that can be accessible. Mozart had that.”

Using a computer program, Dr. Knecht was able to find statistical probabilities in the works of various authors and musicians.

“If I gave [the program] Shakespeare, it could give me a poem that would sound somewhat like Shakespeare. I put in music by a composer called Telemann. It could memorize all the statistical probabilities of Telemann, so if I asked it to write a piece of music for me, it could compose something like Telemann composed, or it could remove context incrementally. It could get less and less context all the way to mumbo jumbo.”

Dr. Knecht used the program to put together a pattern of eight notes, “because our short-term memory span is five to seven things.” She used this pattern and gradually removed context so that it sounded less uniform. For example, beginning with the viola section of the Chicago Symphony, she gave the musicians a starting pitch in the key of E. From there, the musicians were asked to play back the pattern from memory.

When the music resembled Telemann’s work, most of the musicians were able to get the notes right. But the more context Dr. Knecht removed from the pattern, and the less the notes sounded like something by Telemann, the more notes the musicians missed. A similar result came of her experiment with the Toledo Symphony. The high-school orchestras, however, missed most of the notes with every pattern.

The idea to study the differences between music experts and novices came to Dr. Knecht while taking a course with Douglas Hofstadter, a Pulitzer Prize-winning physicist and author whose research includes artificial intelligence and cognition. But her research didn’t stop with this study.

Dr. Knecht has recently published a book titled Developing Your Musical Mental Map. It’s a collection of musical exercises that aims to help students apply music theory to their instrument as well as learn how to hone the skills necessary to access the mental map. The Interlochen Center for the Arts, located in Interlochen, Michigan, will be using the book for a music theory course offered by their academy—a boarding school for music students in the ninth-through-twelfth grades.

“I’m trying to make my research practical right now by thinking of ways to get stubborn performing musicians that don’t want to make changes to figure out what to take into their private studio practice,” she says. “With the book comes a website that the student can use on their own. The teacher can give an assignment, and the student can hear it and do their exercises by themselves.”

Dr. Knecht believes it takes skills—and a continual honing of those skills—to bridge the gap between the classroom and performing. “It’s done through the use of patterns, singing, looking, and playing on instruments,” she says.

Even as an accomplished musician, Dr. Knecht says it’s great to keep learning and thinking about these sorts of questions. Her research has allowed her to do so. 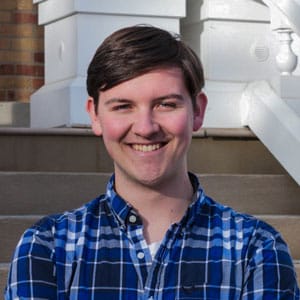 Nolan Ryan, ’20, is an English major and journalism minor from the frigid heart of northern Michigan. If you want to have a long conversation about life and theology, just start by mentioning C.S. Lewis or Emily Dickinson. In the midst of his studies, he occasionally finds time to pursue his love of ’50s music and good coffee.