Biochemistry, Polanyi, and Lewis: Encountering the Mystery of Human Life

Elisabeth Wynia is a junior at Hillsdale College majoring in biochemistry. As part of the Honors Program, she recently completed her honors thesis.

“What do you want to communicate to the world?”

“I want the world to know that science is beautiful.”

Inspired by Dr. Jim Stephens’ question, Elisabeth Wynia chose the most ambitious topic of all: the mystery and beauty of life.

Elisabeth regularly encounters this mystery in her science classes, such as when working with cadavers in her Anatomy and Physiology class. “I look down at the cadaver and I think to myself, ‘What separates this cadaver, which has all the necessary components of the human body, from me?’ The answer, of course, is life. However, life is a difficult thing to quantify.” In exploring this question for her thesis, Elisabeth focused on arguments from two different thinkers: scientist and philosopher Michael Polanyi, and theologian and author C. S. Lewis.

When attempting to describe life, many modern scientists adhere to the theory of reductive materialism, a philosophy which holds that life should be exclusively explained in scientific terms. While this is often perceived as scientific orthodoxy, Elisabeth seeks to explore and advance arguments against the reduction of human beings into pure physics. “The attempt to reduce the entirety of human life – our society, interactions, culture, thoughts, emotion, beliefs – to physics, chemistry, and biology is repulsive to me. If human existence is merely physical, life loses its meaning and purpose.”

The primary counter-argument to reductive materialism which Elisabeth examines in her thesis is that of Michael Polanyi. Polanyi practiced physical chemistry in the 1920’s and 30’s in Europe before turning to the philosophy of science. Notable for arguing that human life could not be fully described in scientific terms, Polanyi posits that man possesses a hierarchical nature. At the fundamental level, human beings are physical beings. Beyond that fundamental level, humans also possess physiological, intellectual, and moral levels which cannot be explained by physics and chemistry. As an example, Elisabeth says, “If you have a functioning heart, the function of it requires an organizational principle that can’t be deduced from the fact that it has carbon and oxygen and hydrogen in specific arrangements. This is not to say that the discoveries of biochemistry aren’t important but they are one part of a larger picture, one that has other aspects beyond the molecular components and cellular functions of the human body.”

In search of arguments that support Polanyi, Elisabeth discovered a similar conclusion in the works of C.S. Lewis. An unlikely ally, considering their differences in background and philosophy, C. S. Lewis lays out a compelling argument against reductive materialism in his book Miracles. Lewis explains that the material and spiritual orders of the universe are vastly different, and that the existence of one does not preclude that of the other. In other words, the existence of a material world does not automatically disprove the existence of spiritual realm. This is similar to Polanyi’s idea of the existence of multiple “levels” in human beings.

According to Elisabeth, examining the ideas of authors who came to similar conclusions despite their differences in background and philosophy represented a fascinating experience. “It’s been really interesting to read Polanyi, who was not a Christian, approach reductive materialism with purely philosophical objections, then to read Lewis, who is coming from a completely spiritual and theological perspective. Seeing these two very different thinkers come to a consensus about human life as more than a material science gives me hope. I may not come up with the world’s next best defense against reductive materialism, but what I can do is show that reductive materialism has been invalidated by many different world views.” 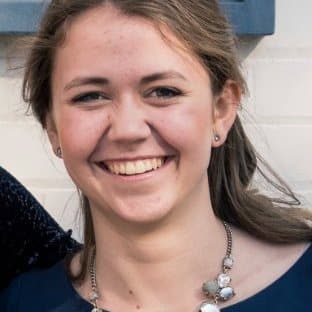