Hillsdale is About Growing As A Person

I love Hillsdale College. I really do. When I first visited, it felt like home, and I was almost ready to drop everything to come here. There was one thing I wasn’t very sure of, though, and that was the political aspect of the College. As a prospective student who wasn’t terribly interested in the political world, I was nervous that I would be isolated in my disinterest and ignorance of something that seemed to be such a big deal here.

On one of my last visits before I made my decision, I asked Hannah Fleming, a freshman at the time, if we could meet for lunch. She brought along two of her best friends, Elise Clines and Catherine Pearsall. We chatted about the academics and the friendships and how they had found Hillsdale to be. I asked them about the political atmosphere and told them how I was worried that I would be out of my element. Their response was a big part of why I chose to come to Hillsdale.

They told me that while the political atmosphere is available and present, it’s not like every single student spends her summers on campaign trails or interns in government organizations. They explained that if you love the political sphere, then there are plenty of opportunities to get involved in really great ways; but if that’s not your thing, you will still find your people, the ones who share your interests and passions.

Obviously, this was enough to convince me, and now I see how true it really is. There is a political sphere at Hillsdale, and if that is what you’re passionate about, you can run full speed ahead with it. But that sphere isn’t the only thing that Hillsdale has to offer. While politics in the classical sense does inform much of how we govern ourselves here and how we view the world around us (beyond political parties and presidential candidates), it is not the only thing that Hillsdale is about.

For me, Hillsdale is about growing as a person, learning to think critically and deeply, both inside and outside of the classroom, and forming strong relationships with some incredible young men and women of character. Hillsdale helps you develop your whole person. Part of this development is found in classical politics, but it is also present in literature, science, history, theology, philosophy, language, social science, and the arts.

Interestingly, I now have more of an interest in politics than I did coming in, because I’ve recognized the role it plays in my liberal arts education. Through the Constitution and American Heritage classes and learning more about our country’s foundation, I’ve become more invested in both our nation’s history and current political events. I wouldn’t say I’m an intensely political person, especially as far as modern-day politics goes, but I have a heightened awareness for why politics is part of the Hillsdale education.

Hannah, Elise, and Catherine were right. I found my people. The friendships I’ve made at Hillsdale encourage me to grow in my faith, pursue my interests, and get out of my comfort zone and try new things. I get to be part of a blog-writing team, take classes on Middle English literature, write essays for student publications, play with puppies and call it volunteering, be part of a mental health awareness group, photograph campus events, and be an RA in a dorm that encourages a community of love and support. Through these opportunities, I’ve been able to grow as a person and share my passions with others. I’ve learned more about the world around me.

I go to a school that emphasizes the importance of politics, but its mission transcends politics. The liberal arts education is about forming a whole human being, and that’s how I’ve experienced it, both inside and outside of the classroom. 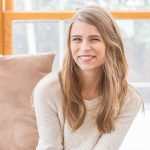 Sarah Borger, ’18, is an English and Spanish major from northern Indiana. In her spare time, she enjoys photography, adventuring, naps, and consuming obnoxious amounts of chocolate.