Recognizing a lion by its claws: Poetry and Creativity in Mathematics

If someone asked you to list the authors of great books within the Western tradition, chances are high that Shakespeare, Homer, and Dante would be among the first authors suggested. But if you ask Dr. David Gaebler, assistant professor of mathematics at Hillsdale College, he would make the case that Euclid, the “father of geometry,” should also be included on this prestigious list.

Intuitively, the humanities might seem to be the cornerstone of a liberal arts education, but mathematics has an equally important role within the Western tradition. Just as learning a language can be both a practical pursuit and an aesthetic one, learning math can also be a practical and a beautiful endeavor.

“The question of ‘where math fits within the liberal arts’ is similar to, ‘Where does French fit into the liberal arts?’” Dr. Gaebler said. “There are a lot of utilitarian reasons for learning math, but there is a beauty justification as well.”

The practical aspects come to mind quickly, as math is an essential tool in professions such as engineering, and it also helps improve critical thinking in other domains. But to link the search for beauty with the study of math contradicts the popular misconception that math is nothing more than a pure calculating tool. On the contrary, it is through this aesthetic aspect that math shares a common foundation with the study of literature, visual art, or music.

Solutions to difficult math problems are often shocking or completely unexpected, and this novelty kindles a sense of awe and appreciation. Dr. Gaebler cites the solution to the “Basel problem,” first solved by Leonhard Euler, as a prime example of this. The Basel problem, which went unsolved for ninety years, had a surprising number included in the solution.

“If you are attuned to mathematical thinking, this solution is the sort of thing that will take your breath away,” he said. “It piques your curiosity because there is a story to be told.”
Excellent mathematicians are like poets who speak in the language of math. And just like poets, great mathematical minds approach their work with distinctive creativity.

“Great problems might have dozens of proofs, and there is very much an authorial style,” Dr. Gaebler said. “You can read a proof and see the author’s method and ways of thinking.”

To illustrate this point, Dr. Gaebler shared a story about Isaac Newton, the greatest mathematician of his day, and how Newton’s  distinctive creativity set his proofs apart even when they were anonymous.

“At a dinner party, Newton heard about a math problem that had stumped all the top mathematicians of the time. Inspired, Newton promptly left the party and set to work on finding a solution, which he discovered after a single night of work. Newton then submitted the solution to a journal anonymously. But his greatest rival, after examining the solution, knew that it was the handiwork of Newton. ‘You can recognize the lion by its claws,’ he remarked.”

Galileo said that “the book of nature is written in the language of math,” and a liberal arts education champions mathematics precisely for this reason. Creativity, wonder, and beauty might not be the first associations that come to mind when thinking about math, but considering the great truths and beauties that math can reveal, it would be a disservice to regard it as anything less than a pillar of the liberal arts. 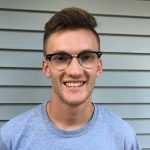 Colby Clark, ‘18, is a psychology major from Stevensville, MI. He loves playing drum set, and loves playing air drums on his trek to class. His daily schedule is always accompanied by the perfect soundtrack. On breaks, he enjoys hiking through national parks and traveling the country (as much as possible on a college kid budget). He ends most days sprawled out in a comfy armchair with his slippers on, reading by candlelight.