The Study of Physics within the Liberal Arts

Physics is an integral part of a liberal arts education, which means that all students, not just physics majors, should have an introduction to the field of physics. This is a good thing, since at least some basic understanding of science in general, and physics in particular, is useful for anyone in this modern era where technology and science-related issues are ubiquitous.

For example, at least a passing knowledge of physics is useful for political leaders and government bureaucrats who are required to make decisions regarding the spending of large amounts of money on physics-related projects, the funding of which, or lack thereof, may have profound effects on the lives of every person for years, even decades into the future. It cannot be denied that the decisions regarding the great science issues of the day—climate change, nuclear power, clean energy, just to give a few examples—are of utmost consequence. Certainly we should hope that the people making these decisions are educated to the highest degree possible in the relevant science, or at least capable of appointing those who are.

The above argument for physics education is not limited to political leaders. It extends to those who, in a representative democracy, are expected to elect those who will make such decisions. Both through their ballot, as well as through their part in forming “public opinion” which might guide government decisions in these matters, citizens, most of whom are not scientists, help determine the course of these scientific issues, and so their general scientific understanding is also very significant. This reason alone should be fairly compelling for requiring non-scientists to study science in general, and physics in particular.

But there are other reasons to study physics besides this reason of “social responsibility.” I would like to suggest just one of these reasons here. One studies physics in order to learn more fully how to appreciate beauty in nature. I’ll rely on Plutarch’s definition of beauty for this discussion: “…beauty is made up of a number of factors happily combined in a due proportion and harmony.” Nature, it seems, is inherently harmonious, and what is physics but the attempt to discover what factors—and  in what way those factors—combine in due proportion to create the harmony which we describe as physical laws?

How much should a non-scientist be initiated into the search for this kind of beauty? As an analogy, we might look at what Aristotle says concerning how much music education a young person should receive: “Let the young pursue their studies until they are able to feel delight in noble melodies and rhythms, and not merely in that common part of music in which every slave or child and even some animals find pleasure.” Applying this idea to the study of physics, we might ask: what, in regard to the natural world, might be analogous to “that common part of music” in which even a child is able to delight? Perhaps one might think about such pleasing natural phenomena as the sunset or a starry night. No doubt you do not need any formal science education, let alone to be a trained physicist, to take delight in these things.

But are there more “noble melodies and rhythms” in these phenomena in which we should nevertheless learn to delight? I believe so. Consider the sunset. Physics allows us to see more than just that wonderful glowing disk. Through physics we realize that inside this wonderful glowing disk lies a titanic struggle of two competing forces precisely balanced: that of gravity attempting to collapse the fantastically massive sun to an infinitesimally small point in space, and the force produced from the energy being released by the fusion of almost inconceivably small yet practically innumerable nuclei deep within the sun. When you look at the sun, the perfect disk-shape is a manifestation of the gravity, and the brilliant light is a manifestation of the nuclear energy. Here are two factors happily (for life on the planet) combined in due proportion. This harmonious balance of powerful forces is one of the reasons we are not freezing or burning up here on earth, and also what creates a delightful image in the evening sky.

Or consider the light coming from the setting sun. You might enjoy the color of the sunlight, but how much more might you be able to appreciate it, knowing that what appears to be one color of light is a superposition of many colors, both visible and invisible, each mixed into the whole in a particular amount (might we say “in due proportion”?). Encoded in the amount of the mixing is such information as the temperature of the sun as well as its composition. This information about the sun is being continuously transmitted to us silently across the vast emptiness of space, and the very medium on which the message is written enlightens our eyes and warms our skin. Indeed, consider that this secret knowledge of the sun entered into the eye of Aristotle every day of his life, but he did not understand the language in which it was written.

I think that these are “noble melodies and rhythms” of forces and phenomena, and that this is Plutarch’s manifold factors “happily combined in due proportion and harmony.” This is part of the beauty of nature. To train a student to delight in this—not just to delight in it because it is pretty—is to develop the character of the person.

Physics Does Not Destroy Aesthetic Appreciation

Nor do I think that this scientific knowledge of the sun destroys the aesthetic appreciation of it. I don’t know any physicists who would not enjoy the sunset like everyone else. Certainly one would not suggest that an artist is less able to appreciate the sun because he or she is able to analyze the image from an artistically technical point of view which others cannot. Just as with the artist, one who has some training in physics is able to appreciate the sunset in an additional way. Indeed, after studying the numbers and graphs and the details of the sun in a scientific manner, a physicist can go out to watch a sunset and say of it, like Goethe observing the Strasbourg Cathedral in twilight: “It made countless details melt together into a complete whole and mass, and now, simple and grand, it stood before my eyes, and, full of rapture, my power unfolded itself both to enjoy and to understand it at once. There was revealed to me in soft intimations the genius of the great builder.”

Except the physicist does not have to settle for intimations. 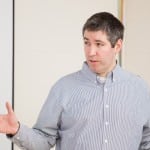