Dr. Yaniga: A Passion for German

As anyone who has chatted with Dr. Fred Yaniga knows, he is passionate about everything German—the language, the culture, and the country itself. Walking down the hallway or in the cafeteria, Dr. Yaniga converses with students and professors in German as if it were the most natural thing in the world, and for him, it is just that.

His deep interest in the German language began during his senior year of high school when he went on a student exchange trip to Germany. After that initial visit, Dr. Yaniga felt that he had to go back, so during his junior year of college (’89-’90), he returned to Germany. He recalled how during this second trip, he witnessed an “incredible political awakening”: the fall of the Berlin Wall. He alternated between watching citizens demolishing the wall and talking with German policemen, his co-witnesses of this historic event. Reflecting on this memory, Dr. Yaniga said that the event was so influential in his life that he felt “a calling to share that experience with others.” 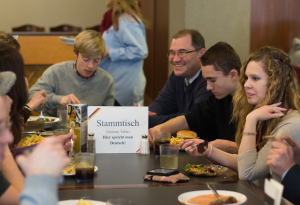 Teaching offers him the opportunity to share this and many other experiences. He spent nine years as a German professor at Butler University in Indianapolis, IN before Hillsdale College caught his eye. Dr. Yaniga reminisces that “the day I read the advertisement for a German professor at Hillsdale, I knew that was the job I wanted.”
During his first visit to Hillsdale’s campus, Dr. Yaniga chatted with German students and prayed with a group of Catholic students gathered in the chapel for their nightly devotions. Impressed with this first visit, he later returned with his wife. While at A.J.’s Café in the Student Union, he and his wife ran into a student he had met on his earlier visit. After greeting Dr. Yaniga, this student turned and politely introduced himself to the professor’s wife. Before visiting campus, Dr. Yaniga’s wife had been hesitant to make the move to Michigan, but after witnessing the maturity of Hillsdale students, her reservations quickly disappeared.

Dr. Yaniga’s enthusiasm, along with the “energy and new ideas” of his fellow German professors, creates a rich learning environment that convinces many Hillsdale students to study this wonderful and fun language.

Victoria Barry is a junior majoring in English with a minor in Classical Education. She participates in Hillsdale’s Catholic Society, volunteers at Mary Randall Preschool, and is the vice-president of the A.A. Milne Society.