From the South Pacific to Southern Michigan

Hillsdale freshman Greg Woodard, a twenty-five-year-old veteran of the US Marines, did not take the conventional path to the military. The son of an American father with dual citizenship, he grew up in Canada and attended a Catholic minor seminary in high school with plans to become a priest. However, after one year of attending college, he discerned that he wasn’t being called to the priesthood and decided to serve in Afghanistan like his older brother. After spending most of his life in what he considered a closed environment, he desired to see the world.

To his disappointment, he enlisted two months after the last Afghan deployment, so instead he entered the Unit Deployment Program and trained all over the South Pacific, most especially in Okinawa. He recalls spending two months in the jungle for Jungle Warfare Training, getting rained on, living in the mud, and avoiding snakes.

“The times that are the worst when you’re experiencing them are usually the ones you look back on and think, That was actually a lot of fun. The experience of being with your friends, going through these really difficult situations—those are the memories that really stick with you. Just knowing that you can push through these really difficult times, not just on your own but with your friends’ help, is a really neat experience.”

His experience as a Marine not only enabled him to grow but also completely changed his perspective on what it means to work hard.

“I remember being in high school, prior to joining the military, I had the attitude that I never really had to try hard. But I learned in the Marines that if I really wanted to do well, then all I had to do was put in the work, and it was solely a result of what I did, not external circumstances.”

After five years, Greg returned to civilian life. Despite his highly specialized training, his time in the military showed him the value of a liberal arts education, as he recognized that it would develop his whole person.

“It gave me a really deep appreciation for learning… I think I definitely would not appreciate my time here right now if I hadn’t joined when I did. I’m really happy I joined, but I’m so happy to be here now.”

Now at Hillsdale, Greg is enjoying the academic rigor, the way he’s been treated by the community, and all of the new challenges he’s come across.

“They treat veterans very well here. It’s different, though. I’m fine being physically tired and dealing with physical stress, but it’s a completely different thing to spend four hours in a library, studying.”

And it turns out Greg, like most veterans here, simply wants to be treated like a normal college kid.

“I know I’m a little bit older than some of you guys, but it’s nice to just be part of the group… Most guys probably don’t want to segregate themselves.”

Offering a final word of advice to anyone considering the military, he laughed and said, “It’s a huge bureaucracy… The military is a great organization, but one thing you need to be aware of before joining is that there’s a lot of paperwork. So you probably want to get good at filling out forms, because you’re going to be doing that a lot.” He also mentioned that the food isn’t really all that great. “But,” he emphasized, “you will meet some really great people. Probably some of the best friendships you’ll ever have you’ll form in the military.” 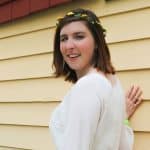 Probably one of the youngest people ever to win three national awards for her novels, teen author Jacquelyn Eubanks, class of ’20, can be spotted sipping tea, typing stories, and (someday) climbing mountains.