The Land & Literature of England: A Lasting Impression

The summer before my freshman year at Hillsdale, I went on the Land & Literature of England study abroad trip. Although we saw incredible sights (England is just as picturesque as you imagine, and I could go on and on about the wonder that is Tintern Abbey), the trip impacted my life in far more ways than simply providing lovely memories.

From the moment I arrived on Hillsdale’s campus for the first portion of the trip, I was struck by the community that emerged among the students. Those of us who were future Hillsdalians were already entranced by the high level of academic rigor, which was certainly echoed in the professors’ pre-travel lectures on Milton, Austen, and Chaucer. But what I hadn’t yet come to appreciate about Hillsdale’s culture was the incredible camaraderie that forms among students. Through dramatic and highly humorous reenactments of scenes from Hamlet and conversations about which parts of the journey to England we were each anticipating the most, we began to form lasting friendships.

Because of this, when we arrived in London, many of us were already familiar with the aspects of the study abroad that appealed most to the others, and we formed groups based on our common interests. I was primarily interested in the sites that featured C.S. Lewis, but I was fascinated to hear why other students were drawn to Milton, Austen, or British history in general. Near the end of our travels, four new friends and I realized that we were all fans of the musical Les Misérables, and we managed to snag five tickets and attend the show during one of our free afternoons.

The trip to England ended all too soon, as I knew it would. But the daunting prospect of attending a school twelve hours from home still lay before me. At the end of my first day as a Hillsdale student, I was nervous, shy, and overwhelmed by the new world I had to adjust to and call home. The fact I kept clinging to was that I wasn’t alone: five members of the study abroad were freshmen with me, and six more would come to Hillsdale the following year. The next day—the first day without my family—several of us met in the arboretum to reconnect over a pot of tea. The first several weeks of freshman year posed challenges unlike anything I’d faced before, but I knew that I could depend on the friends who had traveled to a strange country, gotten lost on the subway, and stuck with one another no matter what.

Now I’m a junior, and I can’t imagine what my experience at Hillsdale would have been like without the influence of the friends I made on the Land & Literature of England trip. One, the shy girl with whom I watched the World Cup on the first day, is my roommate of two years. Maybe we two introverts would never have met without first realizing our shared passion for England’s culture; now, I am so grateful for her quiet comfort through many late paper-writing nights. Another, the guy I ate lunch with in the Warwick Castle garden, became my best friend and boyfriend. I never could have guessed that two weeks in England would impact my life so profoundly. 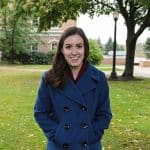