Joshua Benjamins graduated from Hillsdale College in 2014 with a bachelor of arts in history and Latin. He is currently pursuing a two-year graduate studies program in early Christian studies at the University of Notre Dame. During his time at Hillsdale, Joshua was president of Eta Sigma Phi (the classics honorary), president of Lyceum, a member of the Hillsdale honors program, Pi Alpha Theta (the history honorary), Omicron Delta Kappa (the leadership honorary), and he tutored in Latin at Hillsdale Preparatory Academy and Hillsdale Academy.

When Joshua came to Hillsdale, he knew he wanted to be a Latin major. The history major came later when professors in the history department, especially Dr. Matthew Gaetano, encouraged him to continue to take history classes.

“The people drew me to the major,” Joshua said. His Reformation class with Dr. Gaetano made him realize that he wanted to pursue history and put him on the track for his current research at Notre Dame.

“History helped me think about everything in a critical way, in terms of historical development. The tools of critical thinking and reading are invaluable to the program and the classes that I’m taking now. The issues that came up when I was at Hillsdale are still the same issues that come up now, but I feel more prepared because at Hillsdale, students are encouraged to dig into primary texts and wrestle with them and come to grips with what the author was saying by reading them directly,” Joshua said.

While at Hillsdale, Joshua worked on two theses: a history thesis and an interdisciplinary honors thesis. “My history thesis was the single most valuable thing in terms of academic achievement at Hillsdale,” Joshua said. He wrote the 163-page paper on Eucharistic debates in the Reformation period, specifically the debate on ubiquity between Reformed and Lutheran theologians in the sixteenth century. His honors thesis was on Augustine’s theology of language.

Although he’s left Hillsdale, Joshua continues the research he began here. He’s still interested in intellectual history and is currently working on translating sixteenth-century biblical commentaries in addition to his studies at Notre Dame. He has stayed in touch with Dr. Gaetano and last month presented with him on a panel at the Patristic, Medieval, and Renaissance Conference at University of Villanova for research they are both conducting on “The Augustinian Legacy and Communion with God.” Joshua’s paper was specifically about “Participation in God in Seventeenth-Century Protestant Scholasticism: The Theology of Union and the Legacy of Augustine.” Joshua mentioned that his continued research with Dr. Gaetano is great because, “I still feel connected to Hillsdale, even after graduating.”

His program in early Christian studies combines history and theology, and afterwards he hopes to pursue a Ph.D. in classics somewhere, eventually hoping to be a professor while doing research in translating. “But I mostly want to teach,” Joshua said. “I enjoy being in an academic environment. I always want to learn new things.”

He may not always be pursuing history formally, but Joshua is glad that he pursued it here at Hillsdale. Because no matter what he ends up doing, as he says, “History is always relevant.” 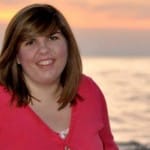 Katie Beemer, ‘18, is a #supersophomore from #puremichigan in pursuit of a degree in #politics and #classicaleducation. She is an #extremeextrovert, uses hashtags excessively, and is the proud owner of a pet reindeer named Edgar John Cervantes III (#itsalongstory). In her free time, she volunteers with A Few Good Men and Crossroads Farm.