Psychology 101 and the Hillsdale College Core

Introductory psychology courses have the potential to, and often actually do, amount to exercises in entertainment that lack in substance. Colorful textbooks, demonstrations, and film clips work together to disguise the idea operating in the background that, if it were recognized, would invite honest consideration. Classes developed in this fashion leave students at the end of a term with a few “facts” that make the psyche appear a fair object of scientific inquiry—and with the sure belief that it really should be. But it is precisely this idea that never gets considered: Why should it be?

In his essay “A Plea for Psychology as a Natural Science,” William James says, “However much our self-consciousness, our freedom, our ability to conceive universals…may ally us with the Infinite and Absolute,…our conscious states” are events “whose happening or non-happening from one moment to another, lie certainly in large part in the physical world.”

James’s observation is the start of a strong response to my question. The psyche should be an object of scientific inquiry, because the success of its unfolding is contingent on and (at a minimum) correlated with our physical being—the organs of the brain and spinal cord, for instance—and physical processes belonging to animate and inanimate matter alike are amenable to analysis by natural science methods.

Few introductory psychology students today can articulate why consciousness should be an object of scientific inquiry; but if they could say it as eloquently as James, does that mean I’m wrong? I don’t think so. I think it means they’re not engaging with the question deeply enough, and there is a real possibility that other ways of thinking about psychology have been lost and need to be recovered.

For instance, Carl Jung desired to treat consciousness as a reality independent of our physical being, or not reducible to it, because it appears distinct. He says that psychology, “is neither biology nor physiology nor any other science than just this: knowledge of the psyche.”

Jung’s understanding casts the task of psychology in terms more consistent with historical understandings of the concept science (i.e., scientia), aligning it not with a method of inquiry but with the pursuit of knowledge in a circumscribed domain. And if the psyche constitutes an “autonomous reality,” as he puts it, is there any reason to suppose that the techniques of investigation developed by physicists and chemists to comprehend the external world should solely define the parameters for exploring the internal life of human beings?

It becomes clear from considering the two poles of understanding represented by James and Jung that the conclusion we reach about the appropriateness of applying the scientific method to the psyche is not easily reconciled. Treating it as though it is, which is precisely what disguising the question from students at the introductory level does, is an impediment to their education. It treats the question, “Why should the psyche be an object of scientific inquiry?” as though it’s really easy to address. It just is. But wouldn’t it be more honest to give students a window into the prejudices that compel psychologists to say that the science of consciousness should proceed in this way as opposed to that? I think so.

This is one of the reasons Psychology 101 is included in the liberal arts curriculum of Hillsdale College. By discovering the ideas that give life to modern psychology, students come to understand where their own commitments lie and that they are not obligated to proceed along the lines the mainstream has built itself upon, but are free to investigate alternative modes of analysis that do justice, for instance, to the belief that psychologists’ paramount task is to understand whole persons, not mere objects or organisms.

The other, and equally important, reason Psychology 101 is included in the college’s core curriculum is also clarified by the perspectives of James and Jung. Would it be surprising in light of the above to learn that the two pioneers held genuine respect for each other?

After meeting Sigmund Freud and Carl Jung at Clark University in 1911 for their first presentations of psychoanalytic theory to American audiences, James remarked that he wished psychoanalysts to “push their ideas to their utmost limits” because he believed “[t]hey can’t fail to throw light on human nature.” And with respect to James, Jung said in a letter that James “made [him] realize that the horizons of human psychology widen into the unmeasurable,” and that in him he detected no hint at all of “intellectual prejudices.”

In two person who appear on the face of things to stand at odds with each other, we see an affinity for knowing that transcends “intellectual prejudices” for certain methodological traditions and disciplinary boundaries. It is a valuing of the object of understanding over the means and mechanisms of pursuing this understanding.

Introductory psychology at Hillsdale College invites students to share in this affinity, to appreciate the reach that science makes into their self-understandings, and the reach that their humanity makes beyond the grasp of a single technique. It is this affinity that lies at the heart of liberal education, and its view is cast toward the highest thought imaginable. It is that thought alone that all our labors strive after, and through it that we are caught up into truth itself. 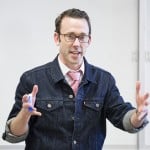 Dr. Collin Barnes is the Assistant Professor of Psychology at Hillsdale College.