If things had gone according to his plan during his senior year of high school, Frank Bruno might never have even set foot on the Hillsdale College campus. As someone who grew up in an urban environment, Frank had his sights set on large universities in metropolitan areas. It was only at the urging of his dad that Frank applied to Hillsdale. “To be honest, I only applied here because my dad asked me to. I thought that large schools presented the best opportunities for academic and social involvement. Hillsdale College proved that I could not have been more mistaken.”

According to Frank, the small size of the student body and the intimate campus environment actually present a huge advantage to students who want to be heavily involved in student life. “At Hillsdale, I’m not just another nameless face among many. Almost everyone knows who I am, and there’s a great support network. Furthermore, an indirect benefit of the smaller campus is that both freshmen and upperclassmen get real opportunities to take leadership roles in campus clubs and organizations, and that’s something I really like.”

When asked about his own involvement on campus, Frank laughs. “It would probably quicker for me to list the things I’m not involved in.” The list of his campus activities is certainly extensive: house director and chapter editor for the Sigma Chi fraternity, member of the rugby team, student ambassador for the Admissions Office, officer in the Young Americans for Freedom student organization, competitor on the Forensics team, and lead guitarist in a student band, to name a few. Frank points to his busy schedule as an illustration of just how wrong his misconception of Hillsdale was. “I was on a phone call with my mom the other day, but had to cut it short because I had to run to a YAF meeting that I had organized,” Frank recounts. “I told her that I’d call back when I had some free time. She responded, ’In that case, you’ll never call back; you’re always so busy at school.’ I was mortified, and had to keep promising that I would call back! However, it really drives home the point that there’s always a lot of really interesting things going on here. There’s just not enough time for everything I want to do.”

As an aspiring psephologist (one who studies and analyzes election results and poll data), Frank’s interest in politics started in high school when he began following the 2012 Presidential Election obsessively and analyzing voting data from each campaign. The Hillsdale College politics and economics departments, and particularly the Constitution 101 core curriculum class, have been instrumental in shaping his perspective on public policy issues and developing his interests in politics. “In Constitution 101, we don’t just read the documents. We discuss why the Constitution was written the way it was, what it’s meant to do, how the ideas enshrined in it came about, and why it’s so important. I think it’s a class that should be mandatory at all schools because it influences every part of our society. To be an American, yet not understand the Constitution – that would be a tragedy.”

Frank particularly appreciates the practical experience that his professors bring to bear on the topics that they teach. “I’m taking a class with Dr. Wolfram right now, and I have never had political and economic concepts explained to me in such a clear, compelling way. Dr. Wolfram served in the Michigan state government, and he brings real-life stories relating to lecture topics into our class discussions, stories that help to clarify complex ideas and bring them to life.” For Frank, these classes have transformed his ability to develop political opinions. “In high school, I got into a lot of frustrating debates about conservatism. I implicitly knew that my ideas about Constitutionally-limited government were right, but I wasn’t able to explain why. The amazing politics professors at Hillsdale have both expanded my understanding of these ideas and equipped me to defend them.”

“I came to Hillsdale because it gave me the best financial aid package. I stayed because it gave me the best education,” Frank says. “I could not be happier anywhere else, and I’m grateful to my dad for pushing me to apply here.” To prospective students who might hesitate to apply to Hillsdale, Frank frames his advice in economic terms: “There’s a marginal benefit and a marginal cost to everything. Here, the marginal benefit massively outweighs the marginal cost. Sure, you’re not in a big city and there aren’t thousands of other students here, but the opportunities and rewards that will come from your effort here completely outweigh anything you could possibly get elsewhere. There’s only one Hillsdale College – don’t pass it up.” 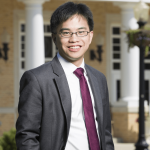