Before coming to Hillsdale, Erich Steger was so shy and introverted that his mother worried about his chances of thriving at college. On top of that, Erich himself was unsure of what to expect from his Hillsdale experience. “I knew I was going to study the sciences; I didn’t have that in question,” he says. “I declared a chemistry major right away.” 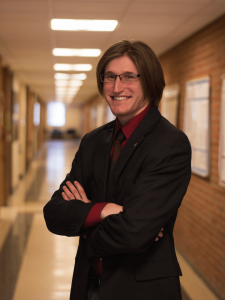 His mother need not have worried. Due to being in the wrong place at the wrong time, Erich soon found himself friends with all kinds of people with all kinds of interests. Erich recalls, “The first day meals opened, a lot of us freshmen didn’t know what the dining hall’s hours were, so we all arrived in the Grewcock Student Union about an hour early. Instead of sitting around, we started up a game of signs. Nobody remembered anybody else’s name, but afterwards, a lot of us could identify each other by the sign we made.” Erich’s best friends came from that impromptu game: “We all went in to lunch and sat together, and I just stuck with a group of people from that game. It turns out that a lot of them were interested in music and science”—the very things Erich himself loved.

Some of those same freshman friends continue to join Erich every day at his typical study spot: a table tucked into a corner of Strosacker’s chemistry floor. “Everyone here enjoys what they’re learning,” Erich says. “The professors teach the material with a lot of energy, and I think that energy transfers to the students. They really spark a desire in us to do well.” With all that energy and friendship, even the long lab periods become fun. “Instead of being a four-hour block of doing work, it’s a four-hour block of having fun and seeing how other people are doing. It doesn’t seem like work. Also, swing dancing may or may not have occurred at some of these lab sessions. A professor only caught us once.” His favorite lab to date? “I liked the ethanol lab. It was neat to see the direct result of your work burning.” He adds, “We all like fire. Anything to do with fire is fun.”

Fire isn’t the only interest Erich shares with his friends. Many of his lab partners run into him in the music building, on the Ultimate Frisbee field, and on the swing club dance floor. He found most of these activities by accident at the Source, a day where all the campus clubs and organizations set up booths to recruit new members. “My friend Kaleb and I went through the Source together to sign up for all the clubs,” says Erich. “We encouraged each other into joining some of them, including swing club, which turned out to be a good, pleasant choice, and something we’ve both continued since then.”

Even though Erich only signed up for a few activities, his diverse friendships from freshman year and each year onward help connect him to the rest of campus: “I come in contact with so many different students in all majors and hobbies that I have a feel of everything that’s going on at campus,” he says. “I feel as if I’m a part of campus.” No longer shy, Erich has found his place at Hillsdale among friends. 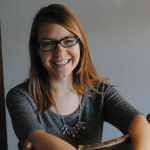 Christian studies major Bailey Bergmann, ’16, works as a student editor and writer for the marketing department. She goes home to a big house in the little woods of Shawano, WI.