Spotlight on Dr. Weaire: Dead Elephants and the Art of Latin Grammar

I started taking Latin classes in seventh grade. At home, my zealous mother taught me all that she could of Latin, and when her ladle of motherly provision scraped the bottom of her generous pot, she hired a retired Benedictine priest to serve as my Latin tutor. By the time I applied to Hillsdale, I had a pretty good handle on Latin grammar, and I tested into the 201 level. I suppose that I thought that I had seen it all. One Latin class is the same as any other, right? Wrong. I had taken classes from my mother, I had taken private lessons from a monk, but I had not yet taken classes from an Irish classics professor.

Dr. Weaire finds the teaching of Latin grammar to be a dull thing. He sees it as the necessary means to the end of being able to read Latin texts. While he is passionate about Latin texts and Roman culture, he notices, as does the rest of the world, that learning grammar is a long, dry process. His solution to the problem is simple: make grammar exciting by causing the students to fear for their lives in class. I don’t know how tall Dr. Weaire is, but if I had to guess I would say that he stands at about 6-foot-11. I don’t know, maybe that’s just the height of the persona that he projects as he vigorously chalks the forms on the blackboard. In a thick, gruff Irish accent he dictates the model sentences that he uses in order to exhibit the lesson of the day. These model sentences always have to do with Matt (the guy sitting on my left) killing Danny (the guy sitting in front of me). Every day before class I sit in my chair and wonder: who will be next?  Also, elephants weave their way into the sentences somehow. I never know why. Here’s an example of one of the sentences that demonstrated the grammar of the indirect statement: “Matteaus dixit Dannyum elephantos interficere.” Translation: “Matt said that Danny killed elephants.” I never know what to expect in Dr. Weaire’s class.

This semester I am taking Dr. Weaire’s class on the Aeneid. At the beginning of the class he explained to us how he dons a manic persona in order to bring life to the grammar of the Latin language. He claims now that we are past simply learning the grammar and are finally reading actual Latin texts that he won’t be as spontaneous or engaging. But I don’t believe it. So far this class has been just as engaging and just as exciting as the last. Dr. Weaire’s passion and comprehensive knowledge of his field bring this dead language to life in a way that I have never experienced before. 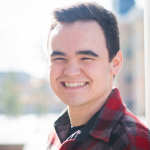 Aaron Andrews, ‘18, is studying English, Latin, and whatever else crosses his fancy. He spends his summers in North Eastern Washington, rural Stevens Country, the foothills of the Rocky Mountains, where he goes for weeks on end with no internet. He spends his free time photographing local herds of cattle, and frolicking in Washington’s famous amber waves of grain.