Most species of Staphylococcus (or Staph), a bacteria that resembles small clusters of round grapes when viewed under a microscope, are usually found residing harmlessly on the skin of humans and other organisms. However, a few species of Staph do pose serious threats to the human body, especially in people with compromised or suppressed immune systems, such as patients recovering from surgery. Most notable of these is Staphylococcus aureus, so-called for its golden pigment. Staph infections are responsible for a significant percentage of post-surgery complications, patient mortality, and massive healthcare costs in hospitals worldwide. Recent years have seen the alarming rise of MRSA (methicilin-resistantStaphylococcus aureus), a strain of the bacteria that is resistant to the typical antibiotic treatments. However, one Hillsdale College student thinks he just might have an answer to this bacterial threat: blue light. 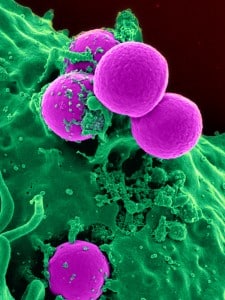 Wyatt McDonnell, a senior majoring in biology, is passionate about the state of medical practice in the United States. “We’ve seen a proliferation of antibiotic-resistant bacteria over the last 50 years, and it’s a result of two things: the over-willingness of doctors to prescribe antibiotics in cases where it won’t effectively help the patient, and patients who don’t finish their antibiotic treatments,” he says. “In both of these scenarios, the bacteria aren’t completely killed off, and this allows them to begin evolving methods of resisting drugs. It’s natural selection at its worst. That’s why I’m a huge proponent of liberally-educated doctors and scientists. We should not only be well-versed in our respective fields from an interdisciplinary standpoint, but also have well-developed foundations in the philosophical and ethical implications of what we do. Antibiotics are arguably one of the greatest achievements of modern medicine; however, we’ve abused their use, and now we’re running out of options.”

The desire to seek effective alternatives to antibiotics drew Wyatt to study MRSA. During his research, he came across an interesting method of fighting bacterial infections called photodynamic therapy (PDT).

The basic idea behind PDT is to kill bacteria by using non-toxic compounds that become toxic when exposed to certain spectrums of light. While the theory behind PDT has been around for over a century, development of the concept has been relatively recent, driven by the decreasing potency of antibiotic drugs and advances in devices like lasers and LEDs.

Wyatt and his research advisor, Dr. Frank Steiner, hit upon the idea of using 5-aminolevulinic acid, or delta-ALA, as the photosensitive compound. Wyatt explains, “Blue light itself can be an effective way of killing MRSA. When the bacteria are exposed to blue light, it releases a lot of energy inside the cell and creates free radical species that jump around within the cell, tearing up bacterial proteins and DNA. We wondered if there was a way to improve on this mechanism by forcing the bacteria to take in a Trojan horse—something that would make them more sensitive to blue light.”

According to Wyatt, delta-ALA is the perfect Trojan horse compound because it’s a precursor to hemoglobin, the protein primarily responsible for carrying oxygen in blood, and Staph bacteria readily take it up as part of cellular respiration. As part of the process of turning delta-ALA into hemoglobin, it becomes a compound called protoporphyrin IX. When this happens, it usually gets exported to the cell membrane for a short period of time. Most importantly, protoporphyrin IX is extremely sensitive to blue light. “During my research,” Wyatt says, “I was able to demonstrate that when you let MRSA take up even a very small amount of delta-ALA and then expose the bacteria to blue light, 40–60 percent of them were killed off within a four-hour window.”

Wyatt’s research has tremendous potential for reducing patient pain, increasing success rates, and decreasing healthcare costs associated with Staph infection treatments. “Usually, in photodynamic therapy, doctors must apply a significant amount of chemical compounds on the patient’s skin, which can be pretty painful because healthy cells are being killed off too,” he says. “With this method, you could potentially apply a much smaller dose of the photosensitive compound. Furthermore, since humans have enzymes that convert protoporphyrin IX to hemoglobin rather quickly, pain levels could be much lower because the bloodstream would be converting and carrying away excess amounts of the delta-ALA. A treatment based on this research could potentially be much quicker and cheaper to develop than a new class of antibiotics, with the additional benefit that it would be more difficult for MRSA to develop resistance to this type of treatment.”

Wyatt did his MRSA research through Hillsdale’s LAUREATES (Laboratory for Advanced Undergraduate Research Education Adapted for Talented and Extraordinary Students) program, a six-week summer research program that provides grants to students in the natural sciences so that they can pursue their own research projects. Wyatt praises the program: “LAUREATES was the best experience I’ve had at Hillsdale. It was incredible to work closely with my professors and classmates in a laboratory environment. This experience confirmed that scientific research was what I wanted to do as a career. I really appreciated the fact that this was my own project; my mentor, Dr. Steiner, was tremendously helpful and guided me every step of the way, but it was great to have responsibility and ownership over my research.”