It took her six years, but this fall, Assistant Professor of French Anne Theobald will be able to assign students homework from a textbook she published in collaboration with four of her colleagues from Ithaca College.

“The students have never had literature, so they need some coaching, some guidance,” Dr. Theobald said. “Usually, there are some short readings, but they’re almost always excerpts. It’s not really analysis. It’s more like, ‘Look, you can read this and understand,’ and not, ‘What is this saying? How does style relate to content?’”

Dr. Theobald currently uses printed proofs of the textbook for her 300-level Intro to Literary Texts class at Hillsdale. Each chapter focuses on a specific theme, and the podcasts, dictations, and readings fit that subject.

During the first podcast, students listen to interviews with native speakers on questions relating to the theme. The interviewees—friends of Dr. Theobald and her coworkers—hail from France and Canada and didn’t have the chance to prepare anything, so their answers are spontaneous.

“It’s very organic, and kind of fun,” Dr. Theobald said. “A lot of these words are the same words that are in the texts we chose. There’s overlap, which I think is nice.”

Junior Colleen Prince was especially impressed by the podcasts.

“They’re speaking to us, and we get to interact with them…and then everything makes sense,” she said.

The textbook authors selected certain words and expressions from those interviews for the chapter’s vocabulary.

The second podcast of the chapter, which follows an American student studying in Paris, is actually a video illustrated by her husband, Ullrich Langer, a professor of French and the director of the Center for Early Modern Studies at the University of Wisconsin, Madison.

In one episode, he meets a girl, and they greet each other with the bise, or a peck on each cheek. But she is from southern France, where that means three kisses. Surprised, he tells listeners, ‘I almost kissed her on the mouth!’

Next, the students do a listening comprehension exercise that requires them to fill in the blanks of what the speaker said. One of these exercises includes a favorite song of Dr. Theobald’s, a French rock, modern retelling of Cinderella by the band Telephone called “Cendrillon.”

“It’s hard, but fun, because it’s authentic audio,” Dr. Theobald said. The biggest perk is for instructors, who no longer have to search for hours for a radio or TV segment that pertains to what’s being taught in class (something she did while teaching 400-level courses on speaking and writing).

“Nothing is worse than a teacher sending you a random, cheesy YouTube video that has nothing to do with what you’re studying,” Colleen said.

As for the reading, Dr. Theobald uses short stories, but never excerpts.

“I think it’s a great transition,” Colleen said. “They’re being given much easier pieces of literature.”

Colleen referenced that she’s reading Nothomb, an author who writes a new fictional book each year for the rentrée littéraire, a time that coincides with the return to school and work when many books come out in France.

“We’re reading things that young adults are reading in France, but the level is perfect for us in our academic setting,” Colleen said.

Colleen, who visits France almost annually and will work there this summer as she did last summer, said she thinks she can finally talk about what she reads in class to others—Amélie Nothomb, not Voltaire. 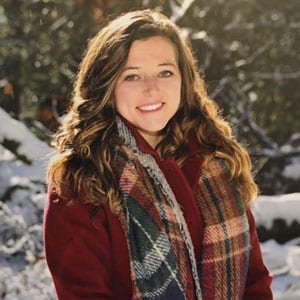