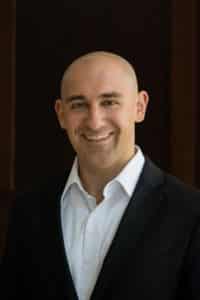 Nicholas Nestorak, ’11, grew up in Hillsdale and developed a love for the performing arts while attending free concerts by professional artists at Hillsdale College. Although he sang in his church’s choir, he saw himself as an instrumentalist more than a vocalist, also playing piano and cello. But college often has a way of changing one’s direction. Today, Nestorak is an emerging tenor in the opera circuit, fulfilling a passion he discovered in Hillsdale’s Music Department.

Nestorak entered Hillsdale planning to major in chemistry and music, with an emphasis on the cello. Nonetheless, he signed up for voice lessons his freshman year with Artist/Teacher of Music Melissa Osmond, who discovered a nascent gift in Nestorak and cast him in the Opera Workshop production of Amahl and the Night Visitors. “I really didn’t know what opera was before coming to Hillsdale,” Nestorak says. “Hillsdale is where I began my classical training, where I was introduced to opera, and where I discovered my musicality.” He continued to develop his voice, participating in each Opera Workshop as well as singing in the choir and chamber choir, while also playing his cello in chamber ensembles and bass guitar in the pep band. “I still draw from the practice techniques I learned in my cello lessons at Hillsdale,” he adds. 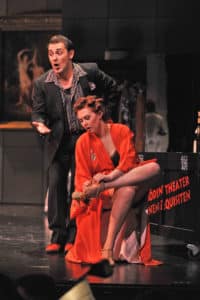 One day, Osmond and David Peshlakai, Nestorak’s cello instructor, suggested to Nestorak that he focus on voice rather than the cello, believing that he could have a career in singing. Nestorak took this to heart, going on to earn his master’s degree in voice from the University of Michigan. He was then accepted to young artist programs at Lyric Opera Weimar in Germany, the Palm Beach Opera in Florida, the Crested Butte Music Festival in Colorado, and the Glimmerglass Festival in New York. “These young artist programs are basically an apprenticeship with an opera company for several months,” he explains. “You hone your skills while working with professional artists, and you get to perform some roles.” In 2016, Nestorak acquired a manager, a connection he made through the young artist programs.

In a fickle field like opera, it’s hard to know when or if an engagement will present itself. “I take every opportunity I get to sing for whoever will listen,” Nestorak says. And audiences are listening. He has performed close to his hometown with Toledo Opera and Opera Grand Rapids—where he most recently played the role of Monostatos in The Magic Flute—and he has performed around the country with Cedar Rapids Opera Theatre, Opera Fayetteville, Austin Lyric Opera, and Wolf Trap Opera, among others. This spring, he will perform the role of the Witch in Hansel and Gretel for BRAVA! Opera Theater, the role of Grant Wood in the world premiere of The Grant Wood Operas: Strokes of Genius for Cedar Rapids Opera Theatre, and the role of Conte Almaviva in The Barber of Seville for Opera Roanoke. Additionally, Nestorak performs at concerts, singing sacred music such as Handel’s Messiah and Beethoven’s Mass in C, and participates in competitions, through which he has earned recognition by Classical Singer Magazine and the National Association of Teachers of Singing, to name a few.

As for the future, Nestorak says that the Hillsdalian in him wants to keep pursuing dream roles and venues, such as playing Faust or singing at the Met. But for him, those dreams do not measure his success. “To me, success in the field is just the joy of being able to perform,” he says.