Behind the Scenes with Haley Walsh

It’s the morning of the first day of technical rehearsals for an upcoming show in the Minneapolis-St. Paul, Minnesota, theater scene. Haley Pelissier Walsh, ’14, gets to the theater early to make sure the costumes and props are in place before the actors arrive. By the time they walk through the doors, she will have checked the backstage safety precautions by putting glow tape on the floor to limit tripping and checked the costumes and props a couple more times.

Once the curtain rises, she’s running around backstage making sure everything is just as it should be—people and props in the right place at the right time. “It’s a stop-and-start process,” she explains. “My job is to make sure we hit all the right spots.”

As a freelance stage manager in the Twin Cities, Walsh uses her liberal arts background and Hillsdale Tower Players’ experience to contribute to the arts through theater.

While a student at Hillsdale, Walsh immersed herself in the classics as a Latin major and as an active member of the Tower Players. “I did a lot of shows with the Tower Players,” she says. “I was very interested in stage management at the time.” Although Walsh was involved with many plays, she never intended to make a career of stage management. Rather, she planned on teaching. “I thought I was going to teach Latin at a classical school, but after that didn’t work out, I thought, ‘Why not try this other thing I know how to do,’” she remembers.

After marrying John Walsh, ’14, shortly after graduation, the two moved to the Twin Cities, looking for a vibrant theater community that wasn’t quite as big as New York City. Immediately, Walsh started searching for jobs on the Minnesota Playlist, a theater job postings list. “A few days after we moved, I found an assistant stage manager position that started the next week,” she recalls. Within that first year, she was involved in seven productions at DalekoArts in New Prague, Minnesota.

Walsh considers her liberal arts education a great asset in her career. “Especially for someone working in the arts, having such a well-rounded education was very helpful,” she says. With the long history of the influence of the arts on society, she says she appreciates the tradition that come with it. “Even though I work in contemporary arts, those come from a tradition,” she says. The practical aspects of a Hillsdale education, such as learning to write well, have allowed her to communicate effectively within her job. “Being able to write and communicate well is very important,” she says. 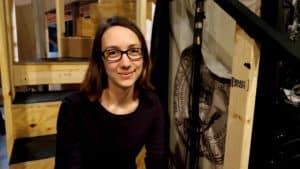 A difficult aspect of her job is that it isn’t a typical 9-5 position. She works primarily in the evenings and on weekends. “And my contracts go show to show,” she explains. Walsh’s resume is extensive with productions worked at many prominent theaters in the Twin Cities area: Minnesota History Theatre, Park Square Theatre, Minnesota Jewish Theatre, DalekoArts, and Lyric Arts. “I never thought I would be doing this,” she says. “I am very grateful that I get to do what I do.”
Walsh says she hasn’t forgotten the role her Hillsdale professors have played in bringing her to where she is today. “When I think about the professors at Hillsdale, I remember that the theatre professors really encouraged me and made it clear that this is something I could do if I wanted to,” she says.