Just as the Internet began to take off, Katrina Iott, ’90, received a call from her mother, asking her to start an online business for their family farm—and so tomatoes.com was born. “We shipped tomatoes all over the country before it became routine,” Iott says.

From there, her love for produce only continued to grow. Iott started her own organic tomato farm—Aunt Katrina’s Organic Tomatoes—in 2018. “We grow mostly organic heirloom tomatoes for wholesale markets and organic groceries,” Iott says. 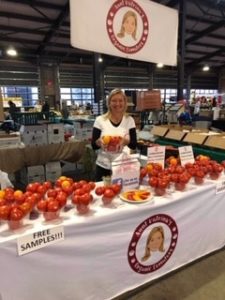 Iott moved forward with developing an organic farm. In 2018, the United States Department of Agriculture approved her land, located in Petersburg, Michigan. She has five acres of certified organic produce and an additional five acres of transitional organic produce, which she hopes will be approved in 2020. In addition to tomatoes, she grows other vegetables such as heirloom spring onions, cabbage, squash, and kale. “The organic industry is growing, as is the local food movement,” she says. “You feel good about producing organic. It’s good for people to know where their food comes from.”

One of her favorite spots to sell tomatoes and other vegetables is in Detroit’s Eastern Market. Iott, who is also a member of the board for Eastern Market, says the opportunity for cultivating community as well as getting “organic, fresh, and nutritious produce” is what makes Eastern Market such a great place. She says her passion for organic produce led her to become part of the farm-to-table food scene in Detroit, particularly through investing in a new restaurant, Marrow—a butcher shop and restaurant hybrid that aims to “promote, utilize and advance a healthy, local, and sustainable food system,” according to its website.

Graduating from Hillsdale with a “rock-solid education” in economics, Iott says a lot of the connections and friendships she made as a student became lifelong. “Because Hillsdale’s campus is small, you have a common bond, and it’s nice to run into others after graduation,” she says.

Family businesses are very important for Iott, who now sits on the Board of the Center for Family Business at the University of Toledo. “I joined the board because it’s a passion for me,” she says. “I enjoy helping other family businesses because that’s how we learn.” With the name “Aunt Katrina’s,” she is hoping that her business will stay in her family with her nephews eventually taking over the farm.