Civil War Veteran Asher LaFleur: The “Bravest of the Brave” 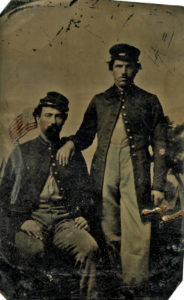 This tintype of Asher LaFleur and an unknown soldier is said to have been taken at Harrisburg after Asher’s release from the hospital, where he received treatment for the wound he suffered at Gettysburg. The tintype was returned to LaFleur in a letter dated November 29, 1888, written by E.H. Graves. A newspaper publisher, Graves had interviewed a woman who said she nursed LaFleur and wondered what had happened to him. LaFleur is described as “a man of stature rather below medium, dark complexion, with mustache.” Because LaFleur lost the lower portion of one leg during the Battle of Gettysburg in July 1863, we can then assume that LaFleur is the gentleman seated on the left.

“Thank you, Class of 2021, for sprucing up the Civil War Monument. My great-grandpa Asher B. LaFleur is on it and will appreciate your efforts. Me too!”   Following the announcement of the 2021 senior class gift of restoring the campus Civil War Monument, the Alumni Office received an email from 1958 graduate Leo Bingley:

Who was Asher LaFleur, who still has a connection to our alumni today?

LaFleur was born in Ellicottville, New York, in 1841. He was a student at Hillsdale College when the Civil War broke out. Like so many of his fellow classmates, he traded his books for a military uniform and went to fight for the Union cause. In fact, during the Civil War, more than 400 Hillsdale men enlisted in the Union Army, a higher percentage than any other western non-military college.

LaFleur enlisted in the 4th Michigan Regiment in 1861. In July 1863, while fighting in the Battle of Gettysburg, LaFleur was severely injured. Confederate soldiers carried him to a barn where they left him for dead. He lay there, wounded and helpless, for three weeks before Union soldiers discovered him and took him to the military hospital in Harrisburg, Pennsylvania. LaFleur received medical attention and returned to service later that year.

In October 1863, LaFleur wrote his first letter to Hillsdale College student Lauraette “Etta” Hadley, after having been assured by friends and mutual acquaintances that she would be glad to receive a letter from a soldier. She wrote back, and thus began a correspondence between the two that quickly developed into a courtship. Following a visit to Hillsdale in early 1864, LaFleur wrote to Etta about the pain of leaving her behind as he returned to military service: “I went to my chamber and cried like a child until, at last, sleep came, and then I dreamed that I lived by your side happy and contented. Oh happy dream, glorious imagination; would that it was a reality and now was the time.” But LaFleur knew his duty to country came first: “I shall await that day with patience. I shall do my duty as a true soldier. I will brave every danger, no matter what.”

On May 10, 1864, during the Battle of Spotsylvania, LaFleur stayed true to his word. Confederate fire struck him again, shattering his leg. Fellow Hillsdalian Moses Luce heard LaFleur’s cries. Without hesitation, Luce charged into a volley of bullets to save his friend and classmate, carrying him to the safety of the Union line. For this heroic act, Luce received a Congressional Medal of Honor.

The months ahead were very trying for LaFleur. He underwent three amputations, including the loss of his right foot. His letters to Etta convey the physical discomfort he suffered and the emotional toll of being a “cripple.” He also wrote of the horrors of war. Yet amidst the sadness of his letters is the tender and growing affection between the two. They married on February 22, 1865. LaFleur returned to the service, but their separation was not for long. He was honorably discharged on June 5, 1865. A war record said of LaFleur, “He was the bravest of the brave.”

The LaFleurs settled in Litchfield, where Asher farmed and also continued his devotion to public service. He served as Litchfield Township treasurer, Hillsdale County treasurer, and mayor of Hillsdale. They had five children—Asher, Hubert, Clara, Winifred, and Chauncey—and counted many Hillsdale College alumni among their descendants.

As mayor of Hillsdale, LaFleur spoke at the dedication of the Alpha Kappa Phi Civil War Monument on June 20, 1895. A Collegian interview later that year quoted him as he spoke of Hillsdale’s Civil War soldiers:

“I saw them fight. I saw them die, and I want to say now, with all those memories rushing in upon me, that a nobler, braver, truer band of patriots never fought for their country than these very college boys of ours….Theirs was a noble duty, nobly performed—the sacrifice of their lives was hallowed.”

At Hillsdale College, we are grateful for veterans like Asher LaFleur, whose name and legacy endures not only in bronze, but through our alumni.

The Hillsdale College Digital Archives contains a collection of letters between Asher and Lauraette LaFleur, as well as correspondence they received from family and friends. You can read the letters here.