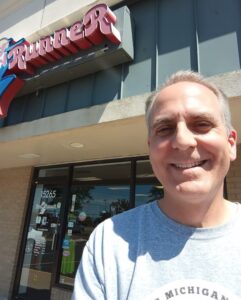 Paul Aufdemberge, ’87, is proof that it is not how you start, it’s how you finish.

Although he had competed in just one year of track and field in high school, he still was able to earn a running scholarship to Hillsdale College. Overcoming a stress fracture in his leg during his freshman year at Hillsdale, Aufdemberge graduated as arguably the most accomplished distance runner in program history. The three-time national champion still holds several school records, and he has had an impressive running career after graduating. In fact, he was named the USA Track and Field Outstanding Masters Runner in 2009.

“I don’t know if I’m a competitive person overall, but as far as running, I really enjoy testing myself and competing,” said Aufdemberge, who was a seven-time National Association of Intercollegiate Athletics (NAIA) All-American who claimed the 1987 NAIA indoor national title in the three-mile run as well as 1987 NAIA outdoor titles in both the 5,000 and 10,000-meter runs. “There’s also a kind of camaraderie because you’re out there running, especially cross country.”

Aufdemberge remains the Hillsdale record-holder in the indoor 3,000 and 5,000 meters and the outdoor 5,000 and 10,000. After graduating, he was a member of three U.S. national teams, including the National Cross Country Championship (1992), the World Road Relay Championships (1992) and the World Half Marathon Championships (1993).

However, he said his “greatest day” in running was helping the Chargers win the 1986 Great Lakes Intercollegiate Athletic Conference cross country title. “I had been sick the week before and didn’t run much, but Dave Mohlman, ’88, and I (finished) 1-2 and we got the win,” he said.

Running is now his business: he recently purchased Total Runner, a retail running shoe store in Southgate, Michigan. He and his wife of 26 years, Jeanne, have two children, Emily and Jacob.

Aufdemberge said his competitive running days are pretty much over, but he is still ingrained in the sport.

“Now I run mainly for the social aspect, the health aspect, and for the fun of running,” he said. “I do jump in a race every now and then, but mostly it’s just about staying connected with the sport and the good friends I’ve made.”