Conversations on Conflict: Beyond the Bubble with Cassidy Kaufman

Hillsdale’s Career Services Department is talking about life beyond the bubble with Hillsdale graduates, aiming to provide resources for undergrads who will soon be navigating post-graduate life. I recently had the opportunity to talk with Cassidy Kaufman, class of 2015. Cassidy majored in sports management and was a member of the track and field team at Hillsdale. He has been working for Amazon in Seattle for the last couple of years, and I was excited to sit down and talk with him about different doors his job with Amazon has opened for him as well as interoffice conflict and how to deal with it.

SAM: Did you have any internships between years in college that set you up for your job post-grad?

CASSIDY KAUFMAN: The first couple of summers, it was a lot of coming back to Seattle and working for a construction company. And then I actually applied for an internship with Amazon. I went through the rigorous interview process and when they found out I was doing an extra year of school, they said, “Hey, we can’t offer you this internship, but would you do something else instead?” For me, it was always a dream to work for Amazon, so I said I would I mop the floors! I ended up working customer service from home for a summer with Amazon. Being able to be on the front lines of a company that is trying to be one of the world’s most customer-centric companies was very cool. Then the following year, I had an internship in Seattle where I could support some of our teams and operations and that was my first taste of HR. That definitely influenced the track I’m on today.

SAM: You said you chose sports management when you were in undergrad. What did you anticipate doing with that degree?

CASSIDY KAUFMAN: Coming to Hillsdale, I was 100% committed to being a history teacher. Growing up in Seattle, I taught snowboarding every year. And I was super involved in my high school and able to teach a couple of different interim classes with a few different programs. Teaching was definitely the game plan. With so many options opened up at Hillsdale, I had to really think, Is this something I want to do right after school? Or is this something I could potentially do later in life and see what else is out there? So it moved from history to journalism. I ended up going the sports management route when I realized there was potential for me to get my foot in the door with the Seahawks. The dad of one of my high school friends was a vice president of Football Operations for the Seahawks.

However, it’s funny, because at Hillsdale, even with such a specialized business degree, I knew that no matter what I majored in, I would still have the baseline foundation I needed to get my foot in the door at Amazon and be successful. Hillsdale is teaching you how to learn, right? And at Amazon, very few people actually majored in human resources. Most people are English or psychology majors. So regardless of my sports management major, I started learning more about HR toward the end of my career at Hillsdale.

SAM: That’s excellent. Were there any other takeaway lessons from your time at Hillsdale that carried over directly into your job?

CASSIDY KAUFMAN: The balance, for sure. Hillsdale students naturally are not there to just do school. It’s encouraged to join some sort of extracurricular activities and be plugged in, to have community. In the real world, of course, you have to have that as well. And if you don’t, it’s not a good recipe. Having so many things on my plate at Hillsdale was beneficial for my transition to the working world because I had the experience of juggling tasks. Maybe I wasn’t the best at juggling them at times, but learning how to prioritize and to make sure I’m doing what’s absolutely necessary at that moment encouraged my development and growth in the working world—and personally as well.

SAM: Very nice. Let’s transition to today’s topic, which is managing inter-office conflict. Can you give me a few tips or a brief overview of how that usually plays out?

CASSIDY KAUFMAN: Being in HR it’s different, because there are a lot of times you might have complaints, or you might have some people provide feedback regarding coworkers or peers. So, I end up hearing a lot of it, right? But it’s also different when it’s my direct peers or my coworkers. Amazon is peculiar in the sense that we give a lot of feedback and very direct feedback, whether it’s constructive or positive. No matter what, we look at it as opportunities for growth.

When I first started at Amazon, I felt comfortable being given feedback, having been coached and just having experience in school in general. But I struggled giving feedback because I felt like I had to be in a certain position to give direction and legitimate feedback to my peers. It was hard. But as I grew with Amazon, it was encouraged to give feedback to my peers and to be direct with that feedback. When I started to give feedback as a two-way street, it was encouraging for me because my peers understood where I was coming from a lot more. They appreciated the feedback I was giving them.

Building that foundational part of a relationship with your coworkers is only going to help. When conflict does arise, you have to be able to listen to where they’re coming from and own your own actions and what you’re saying. If you did something to incite some sort of negative reaction from your peers, own it.  Don’t put up a wall and be stubborn. Don’t assume that your colleagues are receiving the information wrong, or it’s got to be them, but listen intentionally. Push back when appropriate and say, “Hey, this is what I meant to say, or what I feel like I said.” Be able to have a dialogue about it and not be scared of the potential confrontation.

SAM: Does Amazon provide any of that training for you? Or was most of this learned on the job?

CASSIDY KAUFMAN: It was definitely on the job. It was a lesson in trial and error, for sure. You’re thrown into roles where the expectation is that you succeed, but there’s also an expectation that you will fail at times. And that’s encouraged at Amazon, which is a really awesome culture to be a part of. I know that at Hillsdale, and I’ve felt this at Amazon as well, there’s a high bar for excellence. So when we do mess up, or when we do fail…when we totally bomb that paper we were giving to Dr. Somerville, it’s really tough to receive that feedback. We can get so confident in our own ability. We should give good feedback and own everything in delivering that feedback, but also receive it as well. It’s a conversation.

CASSIDY KAUFMAN: Maybe it’s just because I’m reading this book called Extreme Ownership right now, but a lot of it is just: what are you doing as a manager? Are you micromanaging your team? Are you looking over their shoulders constantly? Or are you giving them the autonomy to do different things that they need to do in their day to day where they are in the weeds a lot more than you and you have a higher level of scope. That’s been huge for me. One of my direct reports might mess up or do something incorrectly, I know there must be a break in either my giving them the information or in our process. And we have to think: how can we correct it to mitigate this going forward?

We can look at people differently when they drop the ball on a project. But I think what we need to do, if we are being great coworkers, is encourage that person and understand where there are gaps and how we can assist them, regardless of whether it is somebody you report to or somebody you’re peers with. It’s a challenging thing, jumping into the workforce. And obviously, it’s a very diverse workforce with people from all different backgrounds. Being at Hillsdale, many people are like-minded. It’s a little different when you have to jump into the workforce and commit to what your beliefs are, or maybe recommit to them.

College is a really fun time. I’ve grown so much since leaving Hillsdale, and that’s exactly what I wanted to do. It’s been a heck of a ride. I want to encourage anybody who is jumping into it to look with excitement and also to know that it’s going to be a challenge. But being from Hillsdale, you have so many opportunities and so much foundational knowledge to be able to succeed, and to insist on the highest standards in whatever role you go into. 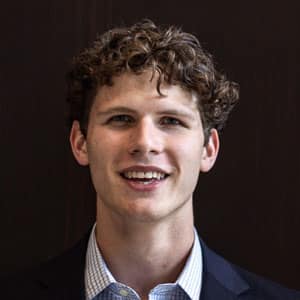 Sam Swayze is a current Sophomore at Hillsdale college pursuing a B.A. in marketing management. He is passionate about easing collaboration between the Hillsdale College and the Hillsdale Community through entrepreneurship. He leads Enactus, the entrepreneurship club on campus, and produces “Beyond the Bubble”, a weekly professional development webinar, and is active in the Greek system and club tennis.