MBA Application Advice: Beyond the Bubble with Dan Englert

BEN DIETDERICH:
Hello and welcome this edition of Beyond the Bubble. My name is Ben Dietderich, and tonight we’re here with Dan Englert. He’s a graduate of the class of 2005. Dan, thanks for joining us tonight.

BEN DIETDERICH: Absolutely. So tonight’s topic is business school. We want to know all about it. Tell us a little bit about your experience at Hillsdale. What led up to your decision to go to business school following that?

DAN ENGLERT: I graduated from Hillsdale in 2005, studied finance and history while I was there, a double major. And I started working at a local community bank after I graduated.
About three or four years into that, I started to look into that possibility of going back to school, to business school, for an MBA program. Part of that was wanting to improve some of the skills we’d started to learn at Hillsdale around modeling and accounting and things like that.

I ended up doing a part-time program in the evenings while I was working. And that’s kind of my story.

BEN DIETDERICH: Cool. So, you know, it used to be that graduate school was kind of the outlier. Now it seems like more and more in the workforce, graduate school is something that more people are coming to the table with. Do you still think it’s worth the investment, in your experience? Do you think it elevated your career and put you in a better position?

DAN ENGLERT: That’s a good question. I would say there are—I would say it’s not a requirement by any means, at least at the institution I work at, but there are a fair number of people who end up doing graduate school and getting their MBA at my office. I would say it is one way to distinguish yourself.

What I always tell people is there can be a couple of reasons to do business school. One is to kind of improve, sharpen the skills that you might have started in undergrad. Another would be networking. So improving your network through a business school-type format. And the third is a lot of people use it as a career transition.

If you were in accounting and you wanted to get into consulting, it’s hard to just go and apply to consulting firms. One way to transition would be to go back to business school, particularly a full-time program where you can interview and are able to do an internship, things like that. That’s one way to transition to a different line of work if that were what you were looking to do.

BEN DIETDERICH: For you, what were the main motivations? Was it a hard decision for you to make? Were you unsure about it when you made it? Or was it clear cut, business school.

DAN ENGLERT: You know, it’s something I thought a lot about. I was looking to transition to a different institution for work, and that was part of the motivation. It’s a big financial cost, depending on what you’re looking at. So that was something I had to weigh as well. But it made a lot of sense for where I was in my career and what I wanted to do long term. Those were kind of the factors I weighed in that decision process.

BEN DIETDERICH: Do you think attending graduate school allowed you to widen your goals per se?

DAN ENGLERT: Sure. Yeah. I think so. Being able to go through the MBA program, I would say a couple of things. Tangible skills came out of that. One is presentation skills. There’s a lot of opportunity in a normal MBA program to practice your presentation skills. A lot of modeling. Particularly where I did my MBA, there was a lot of modeling involved. So spending hours in Excel, working through models, that definitely improves your skill set in the workplace.

Then there’s the intangible benefit of having completed a program like that on your resume that is beneficial when you’re trying to navigate inside a larger organization. The flip side is that I’ve seen many people who never went through an MBA program do just fine in that, too. For me, it was helpful to have a transition with where I was in my career. But I don’t know that it’s a necessary requirement.

BEN DIETDERICH: The other thing that I think a lot of people might be concerned about is the application process. Now, you yourself, you mentioned to me before, you went to University of Chicago, right?

DAN ENGLERT: There are the typical things that you’d expect as part of the application process. Everyone takes the GMAT. There’s the standardized test that is going to get looked at. Letters of recommendation, similar to your undergraduate application process. Essays that everyone completes. Those are all the normal parts.

Your letters of recommendation are going to be from people you have worked with who can attest to your ambition and your integrity in the workplace. Those are some of the key items.

BEN DIETDERICH: Absolutely. If you could say anything, looking back in your experience, do you want to offer advice to alumni out there?

DAN ENGLERT: One thing that a lot of programs will look for is a diverse background or skill set that you bring to the table. So as you go through that application process for a competitive MBA program, make sure that you tell your story—why and what your background is, and how it is going to contribute to the culture of the institution, the organization.

The other thing I would say is just in general about MBA programs. Most people go through MBA programs after being in the workforce for three to five years. So that’s something to keep in mind. It’s not typically something someone jumps into right out of undergrad. It does happen, but for the most part, it’s people who have been in the workforce three to five years, are looking to make a transition or to sharpen their skill set, and then elect to go after that.

BEN DIETDERICH: Great. Thank you, Dan, so much for joining us tonight to talk about your experience.

BEN DIETDERICH: Absolutely. For those of you listening, you’ve been watching Beyond the Bubble. We’ve had Dan Englert tonight, talking about the possible benefits of business school. If you want to watch the whole episode, you can go ahead and rewind if you’re just catching it at the end. Otherwise, check out all the rest of our Beyond the Bubble episodes. Thanks once again! 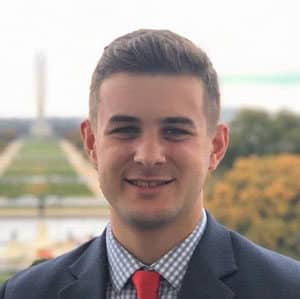