Adam Carrington: Politics and Friendship are Not Incompatible 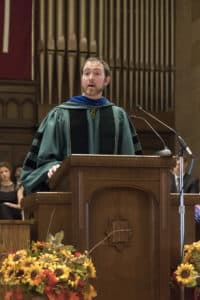 Every Hillsdale student takes a Constitution 101 course in which they explore the historic document and its role within the United States—both at the time of the Founding and today. When Assistant Professor of Politics Adam Carrington teaches that class each semester, he begins the first day with a discussion about man as a political animal. “I want to show students that they will be exploring politics no matter what they study, simply because we are political citizens,” he says.

In the last class session before the final exam, Carrington reveals something that he leaves out until then as an important part of politics—friendship and how the best political partnerships are kinds of friendships. “For that last class, I really want to give students something to show that this class matters,” he says. “What is amazing is that the students really connect with that.” His students saw how the classroom was more than a place of a transaction, where he taught and they, in turn, received class credit. It’s a lesson that he couldn’t have begun the class with, because the students have to experience it firsthand for themselves. “Seeing how they were moved, really moved me,” Carrington admits.

Carrington started the tradition of ending that class with a talk about friendship in his first semester teaching at Hillsdale in the fall of 2014, and that freshman class named him their 2018 Professor of the Year when they graduated four years later.

Before coming to Hillsdale, Carrington received his master’s degree and Ph.D. in political science from Baylor University in Texas. He says one of the things that most attracted him to Hillsdale was the capacity for student-teacher relationships and the strength of the liberal arts education. “I knew it was a school that was liberal arts-focused and had a commitment to that,” he says. “I also knew that it was a smaller school, which meant that I could get to know the students.” Carrington says becoming part of their lives plays a big part in being a good teacher. It was the students that ultimately pulled him to Hillsdale. “I had interacted with them when I was here and they were great,” he says. “They were thoughtful, interested, and the kind of people you want to learn with and alongside.” Carrington looks at the partnership taking place in education as a window to strong relationships with his students. He says he sees his students as friends.

In addition to teaching Constitution 101, Carrington also teaches many upper-level courses, such as Civil Rights and Politics and Literature, and graduate level courses, as well. “They’re really fun,” Carrington says. “The students have enjoyed them.”

Carrington tries to bring a sense of humor into every class. Laughing together has a different meaning, he says. “When you can laugh together, you’ve come to a common understanding,” he explains.

Carrington says he considers it a great honor to have been named 2018 Professor of the Year—and he goes back to the influence of his students that have made Hillsdale the place where he wants to teach. “I can’t imagine doing anything else,” he says.