When the Student Becomes the Teacher

“As I sat and listened to the professors’ stories, I was reminded what conservatism really is: preserving the best from the past for the good of the future.”

I settle into a winged-backed armchair, a small, ornate rug beneath my feet. I’m surrounded by floor-to-ceiling shelves crammed with books. The majority of the room is taken up by a large wooden desk with a window behind it, sunlight flooding in between parted curtains. This is what a professor’s office should look like, I think to myself as I poise pen over paper.

“I hope to have a study like this in my future home,” I admit to Dr. Mark Kalthoff, who is seated before me in a small frame chair clearly meant for nervous undergraduates. It’s funny; he offered the better chair to me and took the chair made for the student. Perhaps because he remembers when the roles were reversed, and he was the Hillsdale College student seeking the wisdom of a history professor.

Kalthoff, ’84, planned to enroll at a small liberal arts college, but he hadn’t expected to get recruited to play basketball at a place he’d never heard of named Hillsdale, and he definitely didn’t expect he’d ever come back to teach history at his alma mater. He arrived on campus in the fall of 1980 with the intention of playing basketball while studying math and science. “I was a seventeen-year-old kid. I didn’t know anything.” He shrugged. “I just showed up here.”

Things took an interesting turn, though, when he attended the required freshman history course, Western Heritage. “I knew I had to take the class just to get it out of the way, and I was glad that I would never have to take a history class again in my life. But I found myself saying when the professor was teaching, ‘Now this isn’t like any history I’ve ever had before. This is the way it should be taught. When I teach it I’m going to teach it this way.’ And then I caught myself saying, ‘What are you saying, Kalthoff?! You’re never going to teach history!’” He smiled. The irony is not lost on him.

He continued on with math and biology until his junior year when he opted to take a course on the history of science. “What I learned in that class was that sometimes the development of science is influenced by factors we don’t think of as ‘scientific.’ It’s influenced by economics and politics and religion and philosophy, and I thought, ‘The history of science opens the door for me to study anything I want.’ The professor who taught that class became a mentor to me, and he encouraged me to keep the door open to history…. Before long I looked at my transcript and realized, if I took enough credits my last semester, I could add history as a major. So over Christmas break of my senior year, I called and asked the dean and the department chair if they could work it out, and I declared a history major heading into my last semester here!” He laughed. He had no inkling he’d come back to teach five years later, nor could he have predicted that the day he’d become a professor he’d also become a dad. His first child was born on his first day of teaching at Hillsdale, August of ’89.

Just over a decade later, Dr. Matthew Gaetano, now a Hillsdale professor, was similarly drawn to history through the Western Heritage course. He’d heard about the college through the political arena and arrived in the fall of 2001 intending to study politics and go on to a political career or law school. Much like Dr. Kalthoff, the uniqueness of the college’s history courses changed his mind. He decided to attend graduate school to continue his studies and soon realized that he had acquired an extraordinary perspective and advantage from his alma mater.

“During the summer before my first year of grad school,” Gaetano began, hands folded, “I was a bit concerned about whether all of the other students from big universities were going to have a different sort of preparation that would have put them in a better position for success in these graduate seminars…but the liberal arts education I received prepared me quite well for a very different sort of education in the context of graduate school—for example, the ability to pick up allusions to Homer or Virgil or Dante as I was studying the Renaissance. It was certainly a testament to the kind of education I’d received at Hillsdale.”

During his graduate studies, Gaetano realized he wished to be a professor. “While I was in grad school, I had a list of courses and seminars that I wanted to teach, and as I thought about the kind of students I wanted to teach, I knew that there would only be so many interested in…medieval universities or…Reformation theology…and I was interested in those topics because of my education at Hilldale. When I had the opportunity to teach the Reformation elsewhere, it took real effort to show the students why this period of history might be of some interest to them. At Hillsdale I don’t have to spend much time showing students why the Reformation is important; this grants more time to focusing on the documents and the key figures, debates, and events of that period, and trying to understand its complexity. I don’t have to be a salesman for the time period; I can be a historian exploring with other students of history.”

Whereas Gaetano realized in grad school that he wanted to teach at his alma mater, it surprised Michael Clark, ’04, that he even arrived back on campus at all after his graduation from Hillsdale. “I wasn’t destined for Hillsdale College.” Clark laughed. “One of my friends visited the college, and I just came with him. It was very different from where everyone else from my hometown was going. I didn’t want to go to a big state school like everyone else and be in the same position as I was before. I needed a change of scenery. I didn’t want to be around the same type of people; I wanted some new challenge. And I had the chance to play basketball and golf here, so everything worked out.”

Clark admitted that for his first year-and-a-half, he was not a very good student. “Hillsdale was an environment that helped me grow up in the right ways.” He shrugged. And while he loved his experience here, he felt, as many students do after graduating, that he was ready to move on. “I, with my girlfriend at the time, walked around campus and did the whole ‘mental picture’ thing and said, ‘I’ll never see you again, campus.’ Like, never! I loved my time here, but I’m not a homecoming guy. I thought I would never see this place again.” He laughed. He could have never guessed he would become a professor at his alma mater just seven years later.

After attending graduate school, Clark was hired to teach economics only temporarily at his former college. However, what started out as a one-year visiting position turned into full time, and Clark was thrown full-speed ahead into teaching.

While Kalthoff, Gaetano, and Clark all noticed some changes over the years to the school—for example, the campus itself has physically developed and changed with new classroom buildings and dorms—there are some things that haven’t changed.

“We still have a very traditional curriculum,” Kalthoff said. “You can’t come to Hillsdale and not read the great books, study the Western and American heritages, and take sciences…. If somebody graduates from this school, and ten years pass and they bump into somebody who was also from their school, what shared experience will they look back on and say, ‘Oh, remember taking that course?’ There are some things so important that every educated person should know it. Every first semester student takes Western Heritage, every second semester student takes Great Books, every student takes Constitution, I could go on and on. That makes a difference.” The fact that he and Gaetano were both influenced to teach history by the same class they both took more than two decades apart is a testament to this.

As I sat and listened to the professors’ stories, I was reminded what conservatism really is: preserving the best from the past for the good of the future. I’ve become aware that I am a part of a rich history and tradition—not just this college’s, but the whole of the West. To be a Hillsdale student is to study “the best that’s been thought and said.” To be a Hillsdale professor is to pass on “the best that’s been thought and said” to the future. 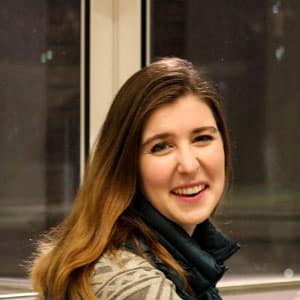