Right after graduating from Hillsdale with an economics major, 14-time All-American and 9-time National Champion Emily Oren, ’16, started working as a Hillsdale admissions counselor. About a month later, she competed in the 2016 Olympic trials. Hungry for another chance after falling short in 2016, Oren pursued her dream to represent Team USA in the 2021 Summer Olympics.

Oren first recognized her Olympic potential during her senior year at Hillsdale. “My coaches told me I could do it, and then I qualified for the Olympic trials, and realized I could!”

Oren qualified for the steeplechase in 2016. Wanting to forget what happened during that race, she candidly reflects on her first experience at the Olympic trials. “I can remember everything pretty vividly. I was just out of college and it was my first big meet. I did not run well and didn’t make a final. I was really overwhelmed and running against a lot of my role models. It’s nice that I’ve had the experience, though, so I can take those thoughts and feelings going into this summer’s trials. I’m a much more confident runner now, and a completely different person and athlete.”

For two years, Oren trained by herself, but then joined OAC (On Athletics Club), a Colorado-based running club founded and led by retired American long-distance runner Dathan Ritzenhein. Being on a team again has been a welcome change for Oren.

“I think the reason I did so well in college was because I was in the Hillsdale uniform and I wanted to show up for that,” Oren states. “I had pride in my school. When I wear my OAC uniform now, a similar thing happens. At first it intimidated me, but now I have pride in this team and supportive teammates to lean on.”

She reflects on how her teammates and coaches from Hillsdale have inspired her to succeed. Even after college, they still do.

“One of the reasons I picked Hillsdale was because I liked the school, but Coach Towne also talked about how excellence is required of our recruiting class, building bricks on the foundation of the program. This really fed into how I wanted to leave the program better than I found it. I put my heart and soul into it, bringing it to new heights.”

Oren thinks back to some of her hardest and best coaching moments from her days on Hillsdale’s track and cross country teams. “Coach Joe Lynn believed I could win a lot of individual titles. When Christina (a teammate) and I took first and second place at Nationals, I could see and hear his excitement around the track, and it would make me excited.” Other highlights include winning Nationals and Program of the Year with Coach Towne, who was a constant source of encouragement.

Oren credits Hillsdale with major contributions in her personal successes and her professional running career. She praises the College for how it has treated her as a student, employee, and alumna. She explains: “As a Hillsdale student, you’re told there’s more than just one part of you, and I’ve personally felt that. After I started working for the College as an admissions counselor, I was overwhelmed because of training, but the Admissions staff worked with me so that I could do both. They didn’t want to hold me back from my career and training goals, so they found a way to let me work from home for months. They have been so understanding that running is something I have to see through personally, and that I love working at the Hillsdale Admissions Office.”

Faced with training, family time, and being an admissions counselor, Oren is familiar with the importance of a balanced schedule. She has found that being 100 percent present in whatever one is doing is essential to happiness and growth. “When I grow as a person in different areas, I grow as a runner. When you grow and commit to more than one thing, you grow as a child of God.”

On June 20 at the 2021 Olympic trials, Oren hoped to make the finals and finish in the top three to ensure her place on Team USA for the 3,000-meter steeplechase. Oren placed 25th with a time of 9:59.34, ending this year’s Olympic journey. Despite the outcome of the race, the College is still proud of Oren’s accomplishments and remains honored to be her Alma Mater.

Oren is taking this time to heal an ankle injury she got in the water pit at the Olympic trials and plans to continue training and racing this August in the mile and steeplechase. She will resume working with Hillsdale Admissions in early fall.

Oren commits herself wholeheartedly to her callings in life, seeing them through to the best of her ability. Encapsulating her roles as an admissions counselor, runner, wife, daughter, and Christian, she says, “I want to do my absolute best and leave something better than I found it, which is something my parents instilled in me when I was young. I want to do it to the best of my ability.” 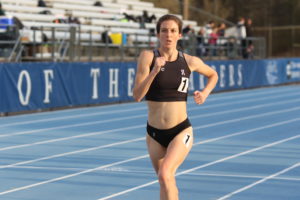 Emma Shea, ’22, studies biology and religion. She is from Middleville, Michigan, but plans on somehow living in every state with National Parks and herds of sheep/ cows. When she is not running late, she is scheming up road trips with friends or how to get into events for free.