Written by The Student Activities Board

Central Hall is a beautiful, iconic building located in the middle of campus, hosting several important offices, including Admissions, Financial Aid, the Registrar, and the Deans of Men and Women.  It’s often the site of prospective students’ first picture on campus and graduating seniors’ last.  Central Hall, however, is also the namesake of one of Hillsdale’s most exciting student events of the year.  For the past ten years, the Student Activities Board (SAB) has been throwing a huge year-end celebration called ‘Centralhallapalooza.’  Each year, the event gets bigger and better, featuring music, food, and attractions that are discussed and planned for months leading up to the main event at the end of April.  This year, the theme is ‘Birthday Bash,’ and students will pour into the tents across from President Arnn’s house to celebrate the 10th birthday of their favorite all-campus event.

Centralhallapalooza, however, was not always the huge event that current students know and love – it has certainly come a long way in the past ten years, and its history is full of quirks and fun memories.

Centralhallapalooza takes form after the Student Activities Board realizes a need to showcase the talents of Hillsdale’s many student bands.  Students line up to watch peer bands take a trailer stage set up in the parking lot across from the Lane and Kendall classroom buildings.  No huge tents, no inflatables, no extravagant food – this early CHP is nearly unrecognizable to our more modern ‘palooza-goers, but saw a promising turn-out and sparked an inspiration to expand upon the event in future years.

SAB Director Rebekah Dell has a bigger vision for CHP.  Moving the event to the grass area across from Broadlawn gives the event more space and opens up the option of having a tent for upperclassmen over 21 to enjoy an alumni mixer with the class of 1982.  Student bands are again the focus, but SAB also brings in the ‘Howling Diablos,’ a funky blues-style band from Detroit, for some extra entertainment.  To the delight of the crowd, Senior Tom Richards proposes onstage to his girlfriend, Becky Briggs, before his band Billy and the Magic Swingset play their last song.  Fireworks arch over the end of a perfect night of music and camaraderie.

Realizing that the way to many students’ hearts is through food, SAB brings more grub to Centralhallapalooza.  The dining hall offers dinner outside of the tent from 6:00-7:00 in exchange for students’ regular meal swipes, and free ice cream, popcorn, and cotton candy are scattered through the hands of excited students throughout the chilly April evening.  The alumni tent doubles in size due to its popularity in the previous year, and students go crazy over the introduction of inflatable obstacle courses and five talented student bands. 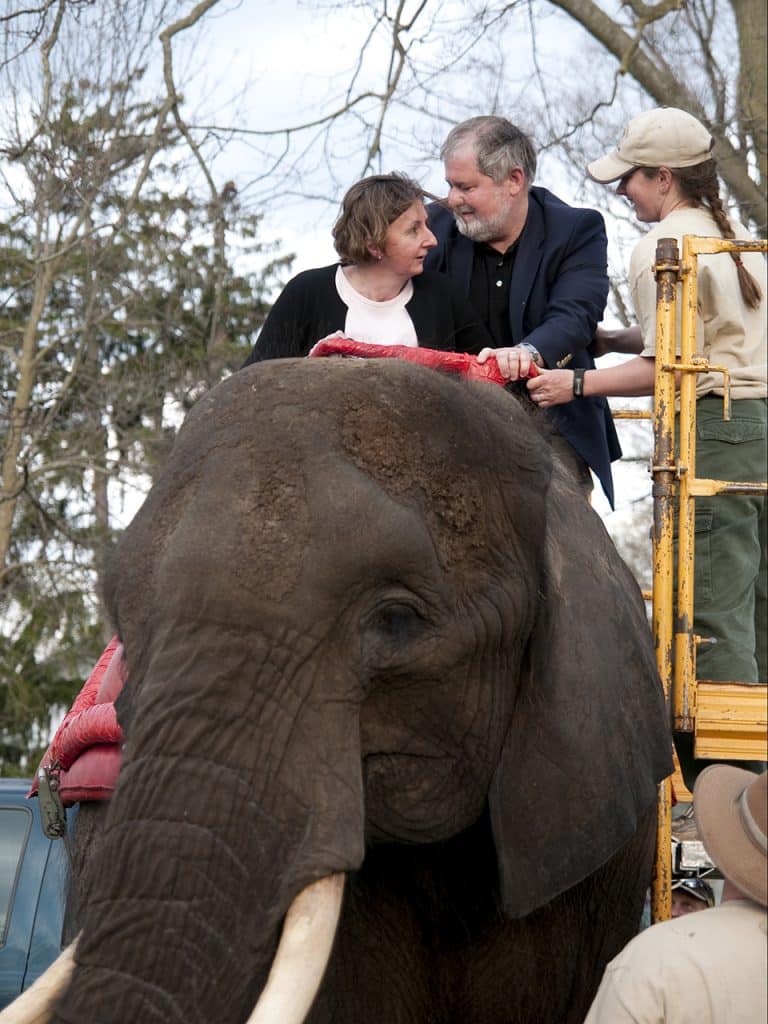 The year of the elephant. SAB sends waves of excitement through the student body with an early announcement of elephant rides at this year’s main event.  What’s more, the elephant of the evening is a celebrity – ‘Laura’ starred alongside Jim Carrey in popular flick ‘Ace Ventura: When Nature Calls’ (1995).  Dr. & Mrs. Arnn enjoy the elephant’s company just as much as the students and even make a trip to the grocery store to buy a watermelon for the gentle giant to snack on between rides!  Once again, five student bands take the stage for one hour each, and students buy CHP t-shirts in advance that feature an elephant graphic and an accidental misspelling of the word ‘Centralhallapalooza.’  Hey, 19 letters is a lot of letters.

SAB tells the student body early in the spring that it will announce a surprise guest for CHP the week before the event, sending the student body abuzz with rumors.  DJ $crilla owns the stage, along with four student bands chosen by a student vote.  A bungee run challenges two students at a time to race each other while attached to a cord.  Inflatable jousting is also introduced, and SAB hires a graffiti artist to decorate pre-purchased Centralhallapalooza t-shirts free of charge at the event.

Returning to its roots, CHP features six student bands.  A Ferris Wheel is the center of attention this year, with lazer tag also bringing in a large crowd.  Students come from all over campus to celebrate the end of a long semester and fill up on their favorite carnival food.

Attractions reach a new level of creativity this year.  Students pour onto the lawn to try their hand at human foosball, rock climbing, Euro bungee, an inflatable obstacle course, and even lazer tag while bobbing their heads to the sound of student bands rocking out onstage.  T-shirts feature the artwork of upperclassman Tommy Lundberg, who won the design contest by reaching nearly two hundred Facebook ‘likes’ on his drawing of Central Hall plugged into a huge set of speakers.

This year’s big event channels the likes of 2010, featuring three student bands and 1990’s rapper DJ Polo.  Students vote on the order of performance for the student bands and spend the night eating corndogs & funnel cakes and taking their turn to ride the pirate ship, speed down the zip line, snap pics in the photo booth, and master the mechanical bull.  Perhaps the most memorable aspects of this year’s event, however, are the t-shirts distributed beforehand, featuring a simple graphic of everyone’s favorite CHP food: a corndog.

Aaron’s Party.  From the very beginning of the school year, SAB student director Haley Johnson knew that she wanted to bring in a better-known artist to shake things up for this year’s CHP.  After leaving the student body in suspense until April, SAB holds a reveal event in the Student Union during lunch to announce that Aaron Carter, a star from many students’ childhoods, will headline this year’s party.  The night begins with student bands and later brings Carter, dawning a backwards Hillsdale College baseball hat, to the stage to perform his early 2000’s hits.

CHP goes country!  Trying something new, SAB features two country groups to top off the rustic theme of this year’s event.  Student bands kick off the evening to the delight of their peers, bringing in a huge early crowd.  A bit later, male singer Chris Lane opens for the talented musicians of Natalie Stovall & The Drive.  Lane rocks the stage with covers of popular tunes as well as his own music, and just six months following CHP, he releases a song called ‘Fix’ that becomes a top hit on country music charts.   Natalie Stovall goes on to amaze the crowd with her talents on the fiddle, dawning cowboy boots and a head full of wildly curly hair.  The usual carnival-style food trucks complement a huge pig roast and s’mores, and students saddle up for pony rides after taking pictures on top of a giant tractor.

This year, Centralhallapalooza hits double digits on its tenth birthday, and SAB is looking to go above and beyond to make it a celebration to remember.  Commemorative drinking glasses were distributed in the Union at this year’s reveal, and SAB announced that ‘3 Shades of Blue,’ a semifinalist band on America’s Got Talent, will be headlining this year’s event.  Three impressive student bands will play in advance, so you won’t want to be late.  Keep studying, students – you’ll want to free up your evening on Saturday for our biggest CHP yet!