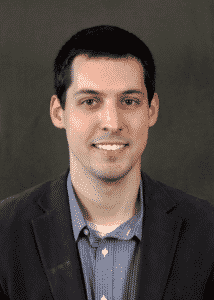 Five years after his graduation from Hillsdale College, Tomek Grzesiak returned to the spot where his interest in education began.

Tomek, an assistant director with the Barney Charter School Initiative, describes his undergraduate experience at Hillsdale as a “rebirth of wonder.” “I performed well in school before Hillsdale, but I didn’t see much of a purpose in education beyond getting a degree for a high-paying job,” he remembers. “Newly awakened by great literature and great teachers, I began to think, ‘I could devote my life to this kind of education.’”

Tomek came to Hillsdale intending to be a mathematics major and computer science minor, but left as an English major and Spanish minor. Inspired by passionate professors from a host of departments, he wondered how things would have been different if he had had a taste of this education in his own K-12 experience.

After graduation, Tomek accepted a job at Founders Classical Academy in Lewisville, Texas. In his first year, he taught students from 7th to 12th grade in English, logic, physical education, and mathematics. Tomek, laughing, describes that first year as a “rite of passage” and “a trial by fire.” Not finished with his own time as a student in the classroom, he completed his master’s degree at the University of Dallas through evening and summer classes. Despite the difficulty, Tomek says that he would never take any of these early experiences back.

Tomek says one of his favorite things about teaching was seeing students remember lessons and poetry long after learning about them in his class, including poems such as Matthew Arnold’s “Dover Beach” and T.S. Eliot’s “Macavity, the Mystery Cat.” “Recitations are good for public speaking and strengthening the capacity of the mind,” Tomek says. “And it’s also just good to commit beautiful and enjoyable things to heart.”

Tomek admits that he misses the classroom, but he views his new position as another way to give students access to proper education. “My impact on BCSI students is much more indirect now,” he says, “but my role allows me to reach students across the country.” Traveling to schools throughout the country and working with teachers in their classrooms and from Hillsdale, Tomek sees himself as a resource to teachers, sharing what he has learned and continues to learn about classical education. In the end, Tomek sees his vocation as an educator as the “giving back of that experience I first received at Hillsdale.”