Mrs. Helton teaches third grade at Seven Oaks Classical School in Ellettsville, Indiana. She earned her B.A. in English from Hanover in 1991. She continues to read Team of Rivals and hopes to complete it . . . eventually. 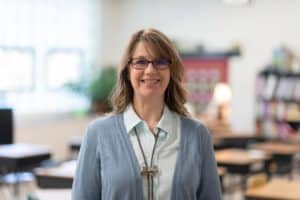 I’ve always been a decent student. Not good, truly, but above average. The one thing I had going for me was that I really cared about what my teachers had to say, mostly. To the chagrin of my social studies teachers, I didn’t like history. It was boring. However, Hanover College, being a liberal arts school, expected every student to take at least one history class, so I signed up for a survey of American history, 1860 to the then-present, which now, incidentally, is nearly 30 years in the past.

As Dr. Murphey walked into the second-story classroom in Classic Hall, I was not impressed. Save for his Buddy Holly-esque glasses, he was completely unremarkable. His notes, untidily stuffed into a manila folder, were pulled from his tattered bag and placed on the lectern. I readied myself by opening my spiral notebook and looking longingly out the window. I can’t remember what exactly he said nor how he said it, but he began talking to us. It wasn’t like a story, yet it was. I found myself captivated; so much so I forgot to take notes. I couldn’t have articulated this then, but I sensed that I was sitting at the feet of a master teacher. He converted me to a history buff. In a small and passing moment, he changed me.

I never told Dr. Murphey how he influenced my perspective. I’ve never told anyone. Is his effort somehow validated because I’ve now told you? I think not. The fact that after all these years I would rather read Team of Rivals than most anything else is the proof. He changed me. This is the true gift that the Barney Charter School Initiative has given educators across the land. A sweeping curricula that is quietly changing students in the small but singular moments of everyday teaching.

As you slug out those moments of being overworked and perhaps overwrought, think of that average student in your class. Think about what you want him or her to read and think in 30 years and press on. You’re doing amazing work.