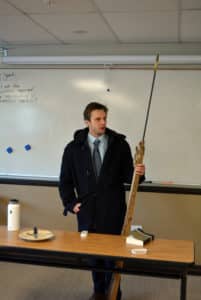 You could say that Moby Dick never made up its mind as to what it wanted to be—or, maybe, that opposing forces within never allowed it to settle on being one kind of book or another. The strongest of these forces are, I think, its two strongest characters. One is Ahab, the tyrannical captain who would make his voyage a war on fate, and the stuff of high tragedy or cosmic epic. The other is Ishmael—the meek, if longwinded, narrator who cannot help but to digress and pun at all points, vying for center-stage not as hero, but as deeply knowing fool.

At times, it is hard not to prefer Ahab of the two; we can at least read him and find meaning in the way we would expect, as we would read Hamlet or Oedipus or Lear. And yet, we should be wary: Ahab would bend and burn his whole world—this whole story, its every moment and metaphor—to his single purpose.

Meanwhile, it is harder to know what to do with Ishmael. While Ahab declaims in high Shakespearean, Ishmael blathers in low style about Plato and art and whales, all the while making wry jokes that only he fully understands. He is lost among the poppies (rather, the kelp), smitten with the thrill of seeing the living world and collating all its pied and motley facts. To Ahab’s tyranny, Ishmael offers one of the greatest non-lessons in all of literature: on this voyage, there are things of worth that do not immediately relate to its end, and that is as it should be.

So at Golden View, we read like Ishmael. Ahab has his space (and it is considerable), but we break from his scheme for long enough to delight in the world around and outside it. We wave harpoons and do what we can to dress the part. Here and there, I belt out a lesson like the nautical revivalist preacher Father Mapple.

When the voyage starts in Chapter 22, students pledge to finish the book by gulping down the saltiest, cheapest anchovies that we can find (or, Swedish Fish for the lubbers).

We spend Whale Days looking at pictures and paintings of whales—a tradition which my colleague, Mr. Beach, has recently enriched by bringing a tape-measure and chalk to class; when his students found that Moby Dick would not fit in our school’s longest hallway, they moved to the parking lot, and, for a time, carline floated over their full-size sketch of the great white whale.

And, at last, we end our work by reading the book’s last chapter aloud in class, sipping at clam chowder as we go. There is always danger in overdoing these things, killing the literature by trying over-hard to make it come alive. But perhaps Ishmael offers up our own best defense: “By reason of these things, then, the whaling voyage was welcome; the great flood-gates of the wonder-world swung open, and in the wild conceits that swayed me to my purpose, two and two there floated into my inmost soul, endless processions of the whale…”