Civilization and Violence: Discussing Lord of the Flies with Dr. Tom West 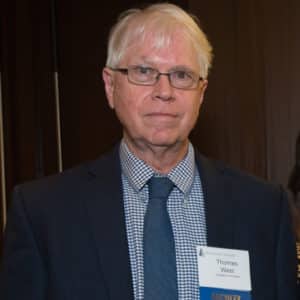 Lord of the Flies by William Golding, according to Professor of Politics Dr. Tom West, “is a great little book.” He says the novel “reveals secrets about human nature that are hidden from civilization, but that you have to know in order to build and maintain civilization.”

The book begins with two main characters: Ralph, the restrained leader who encourages a polite community, and Jack, the cruel tyrant who uses violence to impose his will. “The first impression you get from the book,” West says, “is that Ralph is the good guy and Jack is the bad guy. But what you learn over the course of the novel is that Ralph is clueless about what is happening to him and the other boys—and it almost gets him killed.” Ralph’s idealism leads him to set up a commonwealth with a legislative branch, but no judicial or executive branch.

Jack, on the other hand, understands the need for coercion in civilization. “He’s going to combine all three powers of government in himself,” West says. His instinct for domination and glory ultimately provides food and protection for the boys, “as long as they obey.”

Lord of the Flies is especially important for our time, West thinks. “We are living in a world where we’re never confronted with the reality of what makes civilization possible, namely, violence.” Golding challenges the reader’s conception of violence, revealing that it has no moral value in itself; it simply depends on how it is used. “For instance,” West points out, “when the soldiers save the boys at the end—they represent violence, but they save the day.”

This is an ideal book for high school students, West says, because “It conveys important ideas about life in a way that young people, especially young men, can get: they get violence, hierarchy, cruelty, order, and disorder.” They can honestly debate the following questions: Who is the real hero? If Ralph is the hero, why did he end up losing? What went wrong? The book has merit for older students as well, as West also teaches Lord of the Flies alongside Hobbes in his college classes.

This novel forces us to reckon with the tension between violence and civilization and think through how we can harness the human tendency toward domination and cruelty to serve the cause of virtue and decency.

Download a (PDF format) Lord of the Flies poster to use in your classroom.