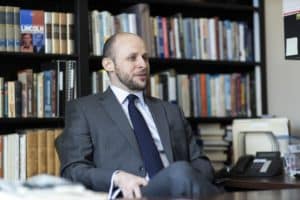 One of the goals of education is to lead students to engage with important questions. In a recent lecture, Associate Professor of Politics Kevin Portteus talked about how to spark those kinds of important discussions in class while staying grounded.

Portteus focused specifically on the Lincoln-Douglas debates as an example of how to teach a historical event through class discussions. “The larger thing that I want to draw from it is to show how this is not simply a debate about slavery or the politics of the 1850s, but a discussion about the larger question of ‘what is justice,’” Portteus said.

Portteus suggested approaching topics in an Aristotelian manner: start with common opinion, with what students think they know, and then build and rebuild upon their understanding.

Applying this method to the debates, Portteus first gave textual evidence to support his claim that the founding fathers of the United States were opposed to slavery on principle. Then he discussed how the presence of slavery grew over time to include complications that made it an economic, social, cultural, and intellectual problem, as well as a moral one.

When Stephen Douglas came onto the scene of American politics, he advocated for popular sovereignty—the idea that the people of each region should vote to make decisions such as whether or not slavery would be allowed in their area.

“The reason that Douglas is so dangerous in this context is because of the fact that he’s teaching people not to care about slavery as a moral issue— simply to think about it as a matter of interest,” Portteus said. Lincoln was hesitant to think of slavery as just another issue to be voted on, so he went head to head with Douglas in public debate.

There is a larger question at stake here, as Portteus pointed out. “Government by consent exists within this larger framework, right? And this larger framework is a moral law that includes things like equality and liberty. What that means is that there are some things that no majority can ever rightfully do, no matter how big it is. This is a dilemma in political science.”

This question of justice, as Portteus noted, is a timeless one: He referenced Plato’s Republic, which contains one of the most famous treatments of the question, does justice belong to the stronger?

And of course, this question is something that is relevant and can be brought to the present day. As Portteus said, “Does justice have a universal meaning that can’t be changed simply because one side or another has more guns or more votes?”

Portteus advised teachers to use practical means, such as maps and texts, to ground the conversation. In discussing the Lincoln-Douglas debates, Portteus encouraged educators to find different angles in which to talk about it, and to lead it back to perennial issues that are fruitful for students to ponder.