Friendship in The Wind in the Willows: Timeless Lessons from a Children’s Classic 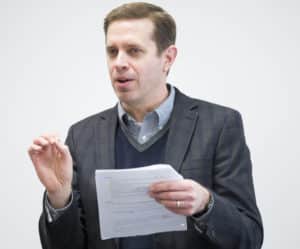 The beloved children’s book, The Wind in the Willows by Kenneth Grahame, has delighted readers with its whimsical animal characters since its publication more than a century ago. But those silly stories of animal antics actually offer the reader profound lessons in friendship, according to Hillsdale College Chairman and Professor of Education Daniel Coupland. At a presentation for Barney Charter School Initiative teachers held on campus this summer, Coupland shared some of those lessons drawn from a few examples in the book.

In a scene from Chapter 1, new friends Mole and Rat are riding down the river after enjoying a picnic lunch. Mole, who represents the apprentice, is restless and yearning to row the boat. Rat, who serves as a mentor to Mole, knows that Mole is not yet ready to take the helm. But in an impulsive display of pride, Mole seizes the sculls and takes over, only to capsize the boat. Feeling humiliated and shamed, Mole asks Rat for forgiveness and a restoration of their friendship. Rather than showing anger, Rat cheerily forgives Mole and helps him dry off.

This short scene vividly illustrates the idiom “pride goes before a fall.” “Shame is connected to our choices,” Coupland said. Grahame emphasizes Mole’s shame in describing both his inward and outward appearance as Mole identifies the impact of his behavior on his friend. This apology scene creates a memorable image that children can return to when faced with making an apology in their own lives. “Great literature should flood children’s minds with powerful images that form their moral imagination,” Coupland said.

In a four-paragraph excerpt from this chapter, Mole, Rat, and Toad are winding down at night after a day of adventure, a day in which Mole has met Toad for the first time. As Toad brags about his ambitions, he insults Rat: “Talk about your old river!” Rat is hurt by the insult, and Mole comforts him, suggesting that they leave Toad and return home. But Rat, who has a history with Toad and understands Toad’s wild ways and big talk, speaks with wisdom. “Thanks awfully, but I ought to stick by Toad till this trip is ended. It wouldn’t be safe for him to be left to himself. It won’t take very long. His fads never do.”

According to Coupland, the first part of this passage shows a common behavior among children—the “we don’t need this guy” mentality. But Rat, as the wise mentor, knows otherwise. “This incident is minor compared to their friendship,” Coupland said. “Rat is willing to stick it out because he cares for Toad and is looking out for Toad’s greater good.”

While BCSI recommends having children read this book independently in 5th grade, Coupland suggested that it could be introduced as a read-aloud book in 3rd grade. Ultimately, The Wind in the Willows offers endearing stories and timeless truths about friendship regardless of the age of the reader.

Download a (PDF format) The Wind in the Willows poster to use in your classroom.