Studying Virtue in Painting and Poetry 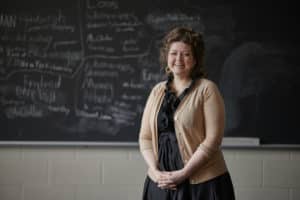 Each year, millions flock to Vatican City to view the art that defined the Italian Renaissance—including the Raphael Rooms in the Vatican Museums. While marveling at the artistry of these works, we may ask what we can learn from these frescoes, particularly about teaching students the virtue of prudence. Like Raphael’s frescoes, poetry also offers visual and mental representations of these concepts. What role does poetry play in educating students about the virtues? Dr. Ellen Condict, literature teacher at Hillsdale Academy and a lecturer in English at Hillsdale College, offered insight on these questions in her lecture: “Classical Education in Plaster and Poetry.”

The Raphael Frescoes, located in the Room of the Segnatura in the Vatican, were painted between 1508-1511. While most consider this period to be the Renaissance, the artwork actually represents themes typical of the Middle Ages, according to Condict. She said, “The iconography serves as an intellectual synthesis, bringing together the four branches of human knowledge—philosophy, theology, poetry, and law—as well as the three greatest categories of the human spirit—the good, the true, and the beautiful.” The four walls include “The School of Athens,” representing philosophy and rational truth; “Disputation of the Holy Sacrament,” representing theology and supernatural truth; “Parnassus,” representing poetry and the beautiful; and “The Cardinal and Theological Virtues and the Law,” representing justice and the good.

Raphael’s “Cardinal Virtues” wall features the four cardinal virtues—Prudence, Justice, Fortitude, and Temperance—represented as women attended by the theological virtues, which are depicted as cherubs. Prudence is featured most prominently in the image. “Today, we think of prudence as being cautious, sensible, and reluctant to take risks,” Condict said. “However, in the Middle Ages, prudence held a higher place. Prudence meant wisdom.” The multi-faced Prudence looks at herself in a mirror, with her different faces contemplating past, present, and future before acting. “Prudence looks in the mirror to recognize the truth about herself,” Condict said. “It’s impossible to govern yourself and your actions properly without knowing your own good and bad qualities. Wisdom illuminates us so we can recognize what justice is and achieve it.”

Poetry, like Raphael’s paintings, also synthesizes many important ideas in a concise and artful way. Condict mentioned the poetry of Gerard Manley Hopkins in particular. “You can return to these poems over and over to find reminders of larger truths in small, beautiful, memorable passages,” she said. The Hopkins poem “As Kingfishers Catch Fire, Dragonflies Draw Flame” offers themes of justice and prudence:

As kingfishers catch fire, dragonflies dráw fláme;
As tumbled over rim in roundy wells
Stones ring; like each tucked string tells, each hung bell’s
Bow swung finds tongue to fling out broad its name;
Each mortal thing does one thing and the same:
Deals out that being indoors each one dwells;
Selves—goes itself; myself it speaks and spells,
Crying Whát I do is me: for that I came.

Í say móre: the just man justices;
Kéeps gráce: thát keeps all his goings graces;
Acts in God’s eye what in God’s eye he is—
Chríst—for Christ plays in ten thousand places,
Lovely in limbs, and lovely in eyes not his
To the Father through the features of men’s faces.

“In the first stanza, which is a description of the natural world, each thing finds a way to express its identity,” Condict said. “Each thing is being acted on outside itself.” The second stanza moves from nature to man and what Hopkins portrays as man’s higher purpose. “Once man sees the world around him, wisdom can act and man can achieve justice,” Condict said.

“The Little Chest of the Memory”
Examples such as these from Hopkins and Raphael show us that through art, students can uncover deep truths about virtue in a visual, memorable way. Condict shared a quote from Hugh of St. Victor that sums up the importance of teaching in a way that engages the imagination:

“We ought, therefore, in all that we learn, to gather brief and dependable abstracts to be stored in the little chest of the memory, so that later on, when need arises, we can derive everything else from them.”