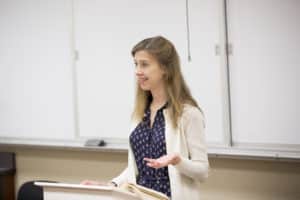 For more than two centuries, readers around the world have adored Jane Austen’s classic love story, Pride and Prejudice, enthralled by the adventures (and misadventures) of the Bennet sisters, their beaus, and their ultimate quests for domestic felicity. While the societal norms of Georgian England so critical to the story no longer dictate the rules of modern courtship, Pride and Prejudice remains tremendously relevant today. “At its heart, Pride and Prejudice is about human relationships, how to know people,” says Dr. Lorraine Murphy, associate professor of English at Hillsdale College. To understand Pride and Prejudice fully, Murphy offers the following background information and encourages readers to look for these three relational truths.

Background
Before diving into Pride and Prejudice, it’s helpful to understand the time and culture of the story, which takes place in England circa 1800. “Austen wrote about a narrow segment of society known as the landed gentry,” Murphy says. People in this class owned land that they rented out, mainly to farmers, and lived off the income generated from the rented property. Most lived in the provinces outside of London, although those with higher incomes might also own a home in London. Jane Austen was herself a part of the landed gentry, so she wrote with familiarity about this part of society.

Also common to the culture of this time was the expectation that a woman would receive a dowry, or inheritance, to take into her marriage. Because the Bennet family fell at the lower end of the landed gentry, and because Mr. Bennet had five daughters, their marrying men “in possession of a good fortune” would prove to be very advantageous!

Download a (PDF format) Pride and Prejudice poster for use in your classroom.