A Spotlight on Joanna Wiseley, Director of Career Services

Twenty-seven years later, Joanna Wiseley still remembers exactly what she wore when she interviewed to be the director of admissions for her alma mater, Hillsdale College. “I was a nervous wreck that day,” she laughs.

It was after she and her husband, Scott, had moved their family to Toledo that Joanna felt the desire to give back to Hillsdale College. She decided to get involved with the alumni executive board, which she served on for five years.

Little did Joanna know the doors this decision would open for her—particularly, a door right back to her favorite campus.

When the alumni director called to ask if she would like to interview for an admissions position, she could hardly contain her excitement.

“I really wanted to move here and have my child experience what a wonderful place the city of Hillsdale is, and the college of course,” Joanna said. “So I did my six little interviews, I wrote my thank you note, and I was feeling really good about it.”

Things, however, did not go the way Joanna was expecting. She received a call letting her know that she had not been chosen for the admissions position, but instead inquiring about her interest in “Career Planning and Placement,” which today is called Career Services.

In an attempt to sound as professional as possible, Joanna asked for twenty-four hours to deliberate.

Joanna has never looked back. In the last twenty-seven years, she has never been bored. She loves her Hillsdale students and says they keep her young. The way Joanna got her current position, director of Career Services, exemplifies her belief that finding internships and jobs is tied to networking with other people.

“I didn’t even apply for a job at Hillsdale. I didn’t even know there was one open,” she said. “It was through the networking I did as an alumni and a board member that they sought me out. It happens a lot like that with our students.”

According to Joanna, her role as the director of Career Services is that of a “connector.” She often uses her alumna status to find connections between alumni and current students. She says the number of alumni who want to give back to Hillsdale, whether financially or through internships and job connections, is something special. “Participating in helping build these relationships is the most gratifying part of my job.” 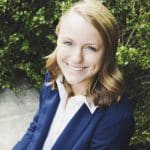