Press down, then wait an hour to attach
the plastic hook. Do not puncture or paint
the walls. Do not spill on the carpet or
erode in any way the perfect likeness
between this white apartment and the one
you came from and the next one that you’ll rent
after you’ve spent a year here, maybe two.

Once you attach the plastic hook, you’ll wait
another hour. Hang up your picture. Wait
a year, then take the picture down. Now peel
the plastic hook and its adhesive strip
carefully off the wall. Try not to tear
a patch of paint off – try. Try not to take
a piece of this place with you when you leave.

I pace and wait for Samuel to end
His crippled calculations, factoring
A halting mess of numbers which depend
Upon, express an ancient ordering,
The mystery of pattern, sequence, set
Which nearly drove another people mad.
No awe, he scrawls the center-fixed sign,
Tease of infinity; I turn my back.
Across, a mountain ram skull’s symmetry—
Its circinations spell in bone a rule
Of radius converging on the real,
Suggesting number’s nature’s fool.
He writes. I wonder from my teacher’s seat
Why halves in nature never fully meet.

Each clove is broken
From its kin, scattered far
Enough to breathe,
Flourish, bulb-become.

Spring brings spears,
Blades below a macey
Spathe, the spiking verdure
Of a club older than war.

At summer’s end,
Death marks its fruition,
What long lay secret
Has become again its own. 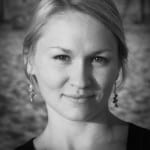 Cara Valle grew up in rolling, green southern Ohio, where she was homeschooled with three siblings before attending a small private high school. She played the violin, started an art history club, and enjoyed catching frogs in the backyard creek. After graduating high school, she attended Hillsdale College, where she majored in English and participated in orchestra, the Tower Light, and activities in history, classics, and art. She married a fellow English major, and they both moved to Arizona to become teachers. After three years in the Southwest, they now live in Chicago, where Cara cares for her son, teaches online, writes poetry, and enjoys jogging and otherwise working out while her husband attends the University of Chicago Law School. Her poems have appeared in Mezzo Cammin, The Lyric, and Literary Mama. 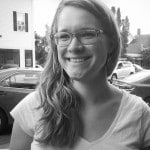 Serena Howe grew up in the vasty hinterlands of Northern California where she spent her days riding bikes, reading novels. At Hillsdale, she majored in literature and learned to love running and poetry. After meandering around the United States after college and working on an organic farm, she somehow ended up in Dallas. Between teaching literature to middle and high school students and working on a masters in English at the University of Dallas, she still occasionally manages to find time for both running and poetry. On most days, she hopes to pursue a PhD in Medieval literature. 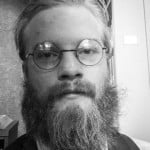 Seth Strickland hails from the beautiful and cold state of Maine. He left the seashore and graduated from Hillsdale College in 2012. During his time there, he began writing poetry in earnest, although he wrote significantly worse poetry long before that. At Hillsdale he also spent hours thinking about the Tower Light in various capacities. He majored in English and Classical Studies and keeps his love of both of those subjects alive in his study of medieval literature in Saint Louis University’s Master’s program. He has been most recently published inGoodbye, Mexico: Poems of Remembrance in which “A Certain Lie About the Phoenix” appeared.