As dusk falls, a small group gathers near a stage on the quad. Beneath a slowly darkening sky, a set of string lights flickers to life, and a single figure, donning a scarlet sash, takes to the stage and opens a book. The other members of the group sit on folding chairs below, listening intently to the reader. After a few minutes, the reader descends and a new one mounts the stage. They read late into the night, drawing lovingly on the words.

They are not here without purpose. Indeed, a sense of ceremony and reverence hangs in the air, stalwart against a subtle breeze. To know what the crowd is about, one needs only to glance the gold-leaf lettering that runs down the spine of one of the books and to trace out, with careful lips, the sounds that bear the immense and seemingly impossible weight of one of three titanic monikers: Homer, Virgil, and Dante.

The group has come here to participate in the inaugural rendition of Hillsdale’s Epic Week. Designed as a joint effort among two honor societies, the Classics Honorary (Eta Sigma Phi) and the Literary Studies Honorary 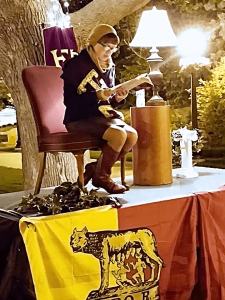 (Lambda Iota Tau), Epic Week fuses two long standing Hillsdale events: the “Homerathon” and the “Virgil Vigil”. Students and professors would gather to read, respectively, the works of Homer and Virgil over the course of an entire night. The societies hoped that, in synthesizing these reading experiences and including Dante, they might foster a more cohesive appreciation of several great works. In the words of Dr. Lorraine Eadie, Hillsdale’s Lambda Iota Tau advisor, Epic Week strives to “promote the love of literature” by exposing campus to the great epics.

Dr. Eadie enjoyed the festivities as both reader and listener. As she related to me, sitting among the audience gave her a chance to step outside her normal role as instructor to assume a student’s perspective, while the communal oral presentation lent a renewed dramatic force to such familiar works as The Iliad, The Odyssey, and The Divine Comedy.

Although it is admirable to study these works academically, there is something special about gathering to read them as a community. Perhaps this is simply because the nature of Epic Week’s presentation returns the works to their oral roots. The authors did, after all, intend their listeners to delight in these stories as a community. In such a setting as Epic Week, one will not, as Dr. Eadie points out, “lose sight of the aesthetic pleasure” of the stories in an attempt to grasp their academic significance. She described how her “attention was engaged in a deeper way” through the sensory experience of hearing the words spoken aloud rather than reading them silently in her head. She personally attests to how reading these works orally drew her into the past, allowing her to partake in the exact sort of “communal event” that Homer himself would have known. 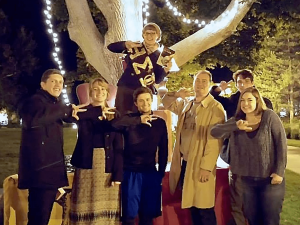 Susan Francino, ’15, a member of both the Classics Honorary and the Literary Studies Honorary, praised Epic Week for the opportunity that it gives students “to make connections” between Dante and Virgil. Although she had spent some time studying Dante with Hillsdale’s own Dr. Stephen Smith– an English professor who has a particular interest in Shakespeare and Dante– Susan  had never heard his Divine Comedy read in such an intently oral manner. In many ways, then, Epic Week is the perfect banner event for the honorary societies that put it on. For people like Susan, it promises a new look at a familiar piece, while also offering a gentle and enjoyable introduction to the great epics for those with less experience. In either case, Epic Week strives to remind the student body of the beauty of literature that, as Dr. Eadie assures me, the members of Lambda Iota Tau and Eta Sigma Phi always bear in mind.

Victoria Barry is a junior majoring in English with a minor in Classical Education. She participates in Hillsdale’s Catholic Society, volunteers at Mary Randall Preschool, and is the vice-president of the A.A. Milne Society.