This semester passed swiftly amidst rigorous rehearsals leading up to the performance of Handel’s “Messiah.” Choir and chamber choir performed the entirety of the work, something never attempted before in Professor Holleman’s time as director of music at Hillsdale College. We were singing and singing and singing, and it was in my head so that I was even singing while in the cafeteria. I’d hear fellow choir members humming snatches as they walked through campus to their next class, and we’d greet each other in notes rather than words.

This was the year of “Messiah,” sung every four years at the College, and we were glad to have the chance to sing something so glorious. Creating beauty comes with much difficulty, but we learned and grew more comfortable with Handel’s obsession over melismas.

In building toward a performance, there comes a point, however, when everything seems perilous. That point was the week before Thanksgiving. We learned notes faster and faster as the weeks flew, but time was running out, and we had to rehearse with the orchestra before break. Overall, choir and orchestra got along fairly well, but there were moments when the altos were lost in a sea of amens, the sopranos couldn’t quite match the oboes, and the men were cast away on their own island of sliding pitches.

I went home overwhelmed by the magnitude of what we were attempting. I told my family that there was so much left to do, and so little time left to do it in. There were so many movements, and so many moments of intense concentration, but we were getting weary, and our concentration was fraying. I sat myself at the piano and plunked notes, making sure I knew every movement I sang with chamber choir. My brother-in-law came in the door and sang with me, “And He shall purify the Sons of Levi, that they may offer unto the Lord an offering in righteousness.”

“That’s one of my favorite movements,” he told me. “I love the harmonies.”

“It’s one of mine, too,” I replied, remembering again that I loved what I was doing, and that it was not in the strength of 150 choir members that success lay, but in grace, that we might offer unto the Lord an offering of praise.

We returned Sunday refreshed and strengthened to sing. Regular rehearsals followed Monday through Wednesday—and then the dress rehearsal on Thursday. The pieces had finally fallen together, and the whole of “Messiah” unfolded before us. For some of the choir members, the dress rehearsal was the first time they had heard the entire work. We finally saw how each part led to the next, building the story of the Messiah, from the fulfilled prophecies of His birth to His promised return.

The time for the Friday performance came, and we filed onto the stage. The orchestra played the prelude, filling the church with notes of plaintive longing, and then a lone voice sang the first words: “Comfort ye, comfort ye my people.” That comfort of Christmas, of peace between God and men, filled the stirring words and thundering melodies that followed—and hung trembling in the air after the final amen. 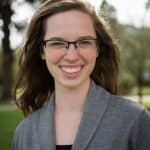 Klara Holscher, ’17, is an English major from Hobart, New York. She possesses a quirky sense of humor, an orange car, and a terrible sense of direction. It remains to be seen whether or not these elements will lead to a career in writing, but regardless, they should afford some amusement along the way.