To me, the most prominent advantage of being in a sorority at Hillsdale College is the friendship and constant support you will find in the women of the organization. They say to surround yourself with people you’d like to emulate; surrounding yourself with the women in sororities will push you constantly to be a better version of yourself. I’ve found women in my English classes who are encouraging me to work harder in classes. I’ve found women in science giving me examples of said hard work, even though they are involved in completely different things than I am. In my sorority, I’ve found women who will watch out for my well-being, and I’ve found women who will push me to be a better human being to others. And though I’ve found this through Chi Omega, I know women in the other Greek houses on campus would say the exact same thing.

Sorority women at Hillsdale College are pursuing excellence. By joining one, you will be taking part in something far greater than yourself. Each organization has its own values and purposes, which, by committing yourself to, will push you to be a better individual. You will work with women around you who are pursuing the same lifestyle, which will bring you closer to forty new incredible individuals.

Though we are constantly encouraging one another to be better, we know that everyone has their faults. I am always greeted with a warm smile as I walk into my sorority house, usually to laughter on the couch while others work at the kitchen table. We know what balance looks like, and we encourage one another to strive to be the best version of themselves while maintaining mental health.

Most sorority members here will say they chose their sorority for the same reasons they chose to come to Hillsdale: their sorority sisters challenge them to pursue a higher good, delve deeper into their academics, and be better friends and better people of the world. I’ve found my sisters pushing me constantly, whether it be to promote kindness even on my worst days, or to study harder when all I want to do is take a nap. For all of the same reasons we chose Hillsdale, we choose Greek life to connect us in working toward something far greater than ourselves—as a group of competent, successful women. 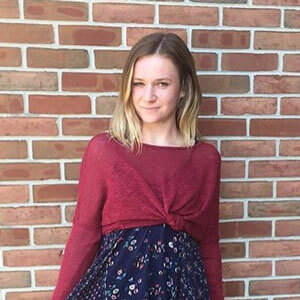 Kate Vanderstelt, ‘20, studies English and chemistry. She is an athlete on the Cross Country and Track and Field teams and a member of Chi Omega Fraternity.