Friday nights in Hillsdale, Michigan, aren’t always a cultural event. But when the stars align, sometimes you spend a Friday night realizing just how talented your friends are.

That’s what I did last weekend when two beloved student-run events converged: the art honorary’s show featuring the work of its members, and Battle of the Bands, a music competition hosted by the Phi Mu Alpha men’s music fraternity.

Hillsdale is a small town in the middle of rural Michigan, but you wouldn’t know it when you walk into The Wedge, especially after it’s been transformed into an art gallery for the night. The Wedge is a third-floor apartment of a building downtown, and its wood floors, exposed brick walls, and twinkly lights make for a warm, chic vibe that made me jealous of the girls who live there. Cover the walls with artwork and scatter some well-dressed art majors throughout the crowd, and this event might just be the classiest thing west of New York City.

The artwork ranged from oil to photography to mixed media and back again. I wandered through the exhibit, chocolate chip cookie in hand: there’s a face made of paint and thread; on that wall is a photo of a pile of logs, printed on wood; farther over, a tiny canvas painted with a perfect butterfly. The pope’s face, a small raccoon, an abstract something that looks good enough to eat—the art is as diverse as the group of students who made it. And that’s the most fun part of the event: recognizing the names on the walls next to the incredible art. It’s enough to make you want to join the art honorary.

Thoroughly impressed, I left The Wedge for the local Elks Lodge, where Battle of the Bands was already in swing.

The list of bands reads like a list of sitcoms that never made it past production: Catalogue, Penny and the Mandimes, The Village Idiots, Dick Whiskey and the Shortstacks, Clemon’s Lemons, and The Wineboxes. The competition is fierce, the outcome of the battle decided by a combination of popular vote and judges’ scores. It’s a night for closet rock stars to make themselves known, and not just among students. The judges daylight as Drs. Hutchinson, Cole, and Kearney, of the classics, philosophy, and English departments.

If the art show channeled an artsy, big-city class, Battle of the Bands revealed the rock ‘n’ roll heart of campus. I spent half an hour in the thick of the crowd, shouldering my way past much bigger people to keep the stage in view as my fiance made like John Bonham and played “Whole Lotta Love.”

There certainly was a whole lot to love from the entire night. Beautiful art, good music, and fun venues, certainly. Most importantly, though, the night showcased the remarkable and multifaceted talent of Hillsdale College students. And since those students happen to be my favorite people in the world, I was thrilled to spend last Friday night cheering them on. 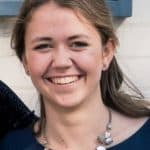