Musical Notes: Behind the Scenes with the Tower Players

The Drowsy Chaperone ran from February 25 to March 1 to record-breaking crowds. Though only a five-day run, the musical took two months of dancing, singing, and blocking to get ready for opening night. The story follows showgirl Janet van de Graaff as she gives up her life of glamour to marry Robert Martin…despite the interference of disguised gangsters, an irate producer, and a case of mistaken French identity.

For the past two hours, the actors have blocked Act I with the peeling tape on the Black Box’s floor as their guide. The director, Dr. James Brandon, sits cross-legged against the wall, thinking. The actors start chattering amongst themselves.

“Yes, don’t break your legs, children,” Dr. Brandon echoes. “All right, we’re going to need someone to stand in for Feldzieg in order for this blocking to work. Micah?”

“He’s in this scene,” the cast calls.

Jenn speaks up, “I can play Feldzieg.”

The scene sets: reporters surround Janet van de Graaff while Feldzieg, producer, coaxes her to give up marriage and return to the stage. Jenn obligatorily tries out his Brooklyn accent: “How can you give up the footlights when you know very well you got greasepaint in your veins?”

Dr. Brandon stops her, “I think the accent should be bigger.”

She cowers, “Why are you making me act?”

“Because you’ve got greasepaint in your veins!” shouts a cast member.

As soon as the scene ends, Jenn rushes back to her laptop, murmuring along the way, “I need to write down these stage notes before I forget.” Soon she’s back into her stage manager role: “Five minute break! It’s 9:17 right now. Be back here at 9:22.”

“Thank you, five!” the actors cry.

Jenn on stage manager duties: “The head stage manager is a go-between for the students and the directors—the acting director, the music director, the choreographer. She makes sure everyone’s schedule works; she makes sure everyone knows where to go and that everything is in the right place. I take a lot of notes—I go to the production meeting and take notes, I watch the show and take notes, I take line notes. During the production, the head stage manager calls all of the cues. It’s stressful, but at the end of the run, I’m so happy. There’s a hormone that makes a mother forget about her labor pains and enjoy her baby—that’s how I feel about my shows!”

Dr. Brandon on putting together a musical in two months: “When you work with college theatre, you learn how students work, how to get the most out of them, and how to get their energy up at the right times. Things aren’t going to be professionally finished by the time the show opens, but you want to get everyone ready by opening night. It’s like a track meet—you want actors to do their personal best, but you also want them to work towards the team goal. It’s always good as an artist to stretch. It’s easy to fall into a routine, a style, a period. I haven’t directed a musical since the late ’80’s, so doing the musical keeps me on my toes.”

No Rest for the Weary

Over twenty cast members are scattered across the floor, stretching, chatting, and shaking off a full day of school. Haley O’Brien runs in after five long hours of biochemistry lab, so frazzled that she forgot her signature rainbow leg warmers.

“How are you doing?” her friends ask.

A cast member hands her a Clif bar, but it’s too late to eat now. Phil Simmons, the visiting choreographer, calls out, “Friends, come into my living room! How are we doing today? What’s new?” The cast circles around him. Hands go up. Someone got a job interview. Scandal starts again tonight. “I spent five hours in lab today,” Haley mentions.

“Well, let’s get moving and shake it out!” says Phil.

Haley leads the line of dancers through their moves. Though her character, Trix the Aviatrix, does more flying than dancing, Haley understudies the lead female roles—good dancing is a must. The class ends with cheers and the last chords of “The Spiderman Theme.” Out in the hall, Haley finally gets a chance to eat a rushed dinner before the actual rehearsal starts up for the night. 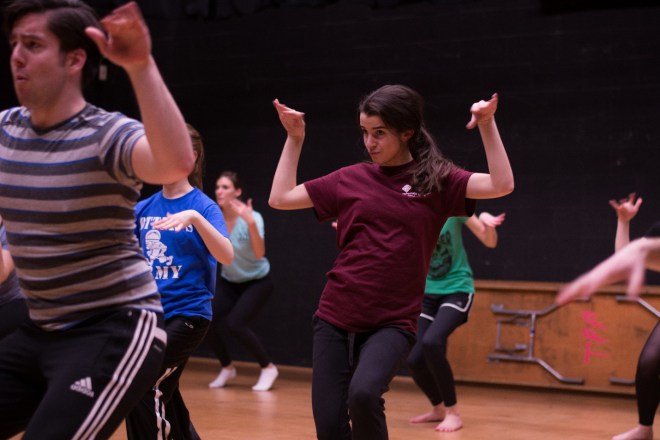 Haley on dance rehearsals: “Trix doesn’t dance very much, but I’ve been dancing since high school show choir. When I auditioned, I knew I could dance pretty well. It’s important to not feel pressured to be absolutely perfect, either in auditions or on the stage. If you make mistakes, you just keep dancing and don’t let your face show it! Phil is fantastic with that—such an encouraging professor. We start every class with warm-ups to strange, upbeat music. We all get into it. In two months, we’ve learned so many different dance routines and styles—Fossi, cowgirl, Egyptian. Each of them is unique and fun.”

Just Another Day of Rehearsal

With a mic pack strapped to his back and a hat tipped over his brow, Jonathan Henreckson inhabits two worlds at once—student actor and Robert Martin, the leading man. At least, he will be once he goes on stage. It’s forty-five minutes into tech rehearsal, and nothing has happened except sound cues going awry. Jenn sits next to the light designer, taking and relaying messages through her headset, occasionally reminding people to “keep it down to a whisper!” Only Haley is excited at this point—the crashing plane sound cues remind her that she’ll soon get to ride in her airplane for the first time. In the meantime, Jonathan lies on his side behind rows of auditorium chairs, reading the Iliad. Five other cast members with laptops sit around him, vying for internet access and the few electric outlets in the theatre. Right now, everybody is focused on getting next week’s homework done, their last chance of freedom before the show opens.

Jonathan on his first Tower Players show: “I miss the rush that performing brings. The lights and the feel of being onstage. That moment when you walk forward and see the faces of three hundred people looking at you, and you smile right back. The knowledge that you just made someone’s day a whole lot better. It was marvelous playing the leading man as a freshman. I was very excited when I got the role. I feel like the leads are the faces of the show. If we look good, have fun, and do our jobs correctly, then it’s a breeze for everyone else in the cast. If the leads don’t give their all, they can bring down the spirits of the whole cast. I made sure to give every show my best.”

When the Curtain Goes Down

It’s over. The cast bows to a full-house of applause, breaking the record of most-watched shows since at least 1998 (according to Dr. Brandon). They scatter to the dressing rooms. Jonathan and his fellow men burst into “I’ll Make a Man Out of You” as tuxes and spats come off and slicked hair shakes back down into their faces. Meanwhile, Haley and the rest of the girls scream over each other: “You were so great!” “No, you were so great!” It’s a happy rush of flying bobby pins, character shoes, and hugs as the entire cast celebrates their two months of work. Jenn gives out her own hugs, relieved the set turntable didn’t break down again today.

A few hours later, after striking the set, repainting the floor, and setting up for next week’s orchestra concert, the cast and crew enjoy boxes of pizza, cans of soda, and one last moment as a show. Slowly, people toss out their paper plates, wave goodbye, and walk back to their essays, labs, and late-night conversations. It’s just another week in their semester. The show must go on.

Bailey Bergmann is a junior Christian Studies major who takes English classes for fun. She plans on being a starving writer and blogger and/or solving the theological problem of evil. While writing this piece, Bailey played the roles of maid, reporter, and cloud in Hillsdale College’s production of The Drowsy Chaperone.