Everything is Personal: Exploring the Orthodox Church through OCF

Freshman Kirby Thigpen headed to The Source, a gathering that introduces students to all of the clubs and organizations at Hillsdale College before the new school year starts, with intention. While in high school, a teacher had sparked Kirby’s curiosity for learning more about the Orthodox Church, a Christian denomination with some unique differences from her Southern Baptist upbringing. At The Source, Kirby sought out Hillsdale’s Orthodox Christian Fellowship. There she met Eleni Lemoine, a sophomore and member of OCF.

When Eleni was first thinking of coming to Hillsdale, she was concerned that there wouldn’t be an OCF since the nearest Orthodox Church is Holy Ascension, forty minutes away in Albion.

“I didn’t expect it, but now it’s the most important part of my life here,” Eleni said.

Now, months later, Kirby is in the process of converting to Orthodoxy and is regularly attending Compline, prayer that takes place Monday and Wednesday nights in the Dow chapel, catechism classes, and Holy Ascension with the group.

Brigid Majmudar, a sophomore whose father is a Greek Orthodox priest, shared that many Hillsdale graduates who convert to Orthodoxy during their years at Hillsdale often stay in the Albion area after graduation so that they can stay members of the church. She said that makes the entire church young and vibrant.

“The cool thing about the church being only forty minutes away is that it gives the OCF kids here a community in Michigan that is entirely different and distinct from Hillsdale,” Eleni added.

Brigid explained that Orthodoxy is different from other faiths popular at Hillsdale and in the Western tradition. They tightly follow ancient traditions with a set liturgy, and they pray to saints, which is often stigmatized.

“We believe through prayer we can still have a relationship with people who have grown close to God in their lives—who would be saints,” Eleni explained. “We can ask them for spiritual help. They’re like a spiritual mentor.”

After being welcomed to join their Compline service one Monday night, I decided to travel with them to Albion to experience the Orthodox Church for myself.

The sanctuary was refreshing, ornately decorated in golds and reds. The atmosphere was reverent and almost mystic. We stood facing the altar the entire time except during the sermon when we sat on rugs. The priest used a censor, a traditional metal incense burner, which I had never seen before. Most people refrained from looking at any guide while going through the liturgy.

“I could probably recite the entire liturgy because it’s been the same since I was born, and for the past two thousand years,” Brigid said about the service. “When you’re super familiar with it, you start to look for new things.”

Afterwards, I was welcomed to gather into the basement of the church for a post-service vegan meal, a type of fast practiced by many in Orthodoxy on feast days and certain days of the week.

I was able to see and hear through these conversations that OCF is one example of individuals who consistently seek truth. Whether it’s through professor mentorship or the carpools to church and back, it’s a place where students’ beliefs have the ability to grow and flourish. 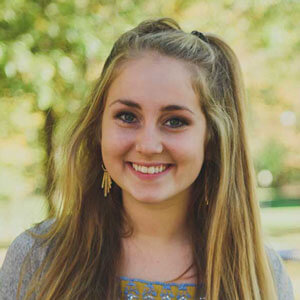