Catherine Coffey is a senior at Hillsdale College, studying English, theatre, and dance.

Catherine Coffey’s singing career began with a ukulele. At the age of seventeen, she landed a professional acting job, received her first paycheck, and purchased a ukulele. She carried her new ukulele in a little backpack to a local coffee shop, where a patron named Derek asked, “Do you know how to play that?”

At this, Derek started for his car, and lifted a tennis racket case out of his trunk. In it was a ukulele of his very own. They proceeded to have a spontaneous jam session, followed by a long talk about music. He offered Coffey the chance to open for him at a gig, to which she agreed. They became fast friends.

That summer, Coffey met a boy. “I was super smitten,” were her words on the matter. They both happened to love Peter Pan, thus inspiring the first song she ever wrote—“Peter Pan.” She played it at her first gig, people enjoyed it, and so she continued to write. She then created her own YouTube channel. Early videos included “Peter Pan” and “Patron Saint,” written and recorded just after a breakup. But by the time Coffey began school at Hillsdale College, her music had dropped by the wayside.

YouTube had begun a project of scoping out channels to see what kinds of musicians they could discover and feature on the front page. One day, YouTube discovered Coffey’s channel. Overnight, her breakup song “Patron Saint” threw Coffey into the weird world of YouTube, and she became a YouTube sensation—all without her knowledge.

A multitude of “Congratulations!” from friends and acquaintances informed her of her sudden success. She was cheered and motivated by the positive feedback from close friends and random YouTubers alike—and she chuckled at the occasional comment that mistook her for a guy because she tucked her hair into a panda hat.

Coffey attributes the success of “Patron Saint” to raw emotion: twenty minutes after her breakup, she wrote the song. Four hours later, she recorded it (video and all) and threw it up on her channel. Her songwriting had evolved from the cute and simple “Peter Pan” to an honest response to her emotions. “Patron Saint” represented the direction she wanted to take her music, and the positive response turned that desire into a reality.

She used the momentum of her YouTube hit to inspire her musical presence here at Hillsdale. As college picked up speed, her songwriting continued to evolve to maintain the transparent honesty of her YouTube hit. Coffey even formed a band with her friend Josiah, called Virginia and the Woolf—yes, like the author.

The debut of Virginia and the Woolf came during student-run Battle of the Bands, where they gave the judges a memorable show by splitting a drum kit between the two members who were largely accustomed to acoustic performances. Their attempt to depart from the acoustic resulted in Coffey playing cymbal, snare, keyboard, and tambourine (almost simultaneously) and Josiah on guitar and kick drum. Virginia and the Woolf’s creativity and coordination landed them a second place award.

The rest of Coffey’s Hillsdale music career was history. She became a fixture at every performance opportunity Hillsdale offered, from the energetic, chaotic Battle of the Bands, to the cool, acoustic Concert on the Quad, to cozy, quaint coffeehouses in A.J.’s Cafe.

But her story doesn’t stop there. The summer before her junior year, Coffey was doing what many normal younger siblings who have reached their second decade do—attending an older sister’s wedding. Completely delighted with her siblings finding love and starting new chapters in their lives, she wrote a song titled “Where We Start.”

Little did she know that this wedding would be a place where she would experience another “start.”

Halfway through a piece of wedding cake, she bumped into the wedding DJ, who approached her with exciting news: “Hey, I’m working with a new record label, starting a business to promote new artists. I’ve heard your stuff on YouTube, and we would really like to work with you.” Too full of cake to say anything other than, “Oh, wow,” Coffey agreed.

She joined Make Believe’s record label and began working on her album two weeks later, learning the ropes of recording throughout the summer.

Coffey’s five-track album is self-described as “singer-songwriter, with soft sound and continuity from start to finish.” It covers the breadth and depth of her emotional experiences and musical growth over the last four years, and she presents herself as a Catherine Coffey who is silly and mature, eighteen- and twenty-one-years old, a college freshman and a college senior.

Her album, Where We Start, comes out this November. 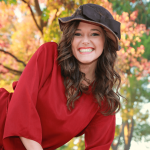