A Day in the Life: Journalism at Hillsdale College

Regan Meyer, ’21, came to Hillsdale College specifically for the Dow Journalism Program—a bold move, considering she had no prior news writing experience. “I’d never actually written a news story before this. The first time I walked into The Collegian office was a gamble. I put all my eggs in one basket and didn’t even know if I would be good at it or like it.”

Nevertheless, she dove headfirst into the program her first semester freshman year, and within a year, she became the paper’s web content editor and circulation manager. In other words, she’s the one who wakes up super early every Thursday to get the newspapers hot off the press and distributed around town.

She’s also the volleyball beat reporter, so every week she has to report on the team’s latest game. A typical Monday for Regan, besides her regular class schedule, includes running around, trying to interview the volleyball players and coach. After that, she has to be at The Collegian assignment meeting at 7:00 p.m. where she raises her hand to take too many stories—typically three or four each week. After the meeting, the editors of the sections of the paper she’ll be writing for send her “stubs” online with information on the articles, word count goals, and due dates.

“There’s a weird adrenaline rush to get a story,” she said. “You just have to walk up to people, be nice and assertive and sure in what you’re asking and what you want. You have to do well in a time crunch. If someone can’t meet you until Tuesday afternoon you have to be able to crank out an article in an hour that night.”
Fast-forward to Wednesday: Regan’s back at The Collegian office, working with the online articles and web content from 4:00 to 11:00 p.m., while the other editors usually stay much later, working on Adobe InDesign to get the layout of the paper perfect and make some finishing touches on the articles.

Thursday morning she’s up bright and early—anywhere from 5:30 to 6:30 a.m.—and off to the printer’s to pick up the newspapers, take them to The Collegian office, print off her delivery route, and drop the papers off at thirty to forty locations on and around campus, including the probate court. She also typically stuffs envelopes for subscriptions and remains on-call until noon.

By Saturday she should have written her assigned articles from Monday night, except for the volleyball beat, as the team’s games are typically on Saturday and she isn’t able to interview the girls until Monday. Then Sunday at 2:00 p.m. she has an editorial board meeting, which includes putting all of the coming week’s stories up on a massive whiteboard for writers to take at the next day’s assignment meeting. She and the other editors discuss what’s going to be on A1, the front page, and they decide what the staff’s weekly editorial opinion will be about.
Before she can start writing her articles, Regan has to send emails, make phone calls, and meet with people for interviews throughout the week. Two of her favorite memories include running around a local airport, asking people about plane models, and talking to the creator of the Montana Ultramarathon called Le Grizz—a fifty-mile footrace near Glacier National Park, held every second Saturday of October since 1982—because a Hillsdale professor had run the race seventeen times!

Regan loves journalism because it allows her to tell others’ interesting stories with their honesty and trust. “With journalism you’re telling someone else’s story, and that’s a big honor. If you just met them on the street you wouldn’t be told this, but because of what you do, they’re willing to talk to you. What was supposed to be a twenty-minute interview turned into a forty-minute conversation. People trust you that much to tell their story.” 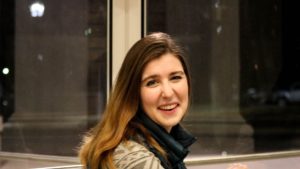