The Road to Messiah

I am seated in the front row, third from the right. This was it. This was our moment—the first performance of Handel’s Messiah in Christ Chapel. And as if that were not enough, it was a comeback moment—an Easter performance after two semesters of canceled choir concerts. We would be delivering a reminder of hope to all those gathered to listen to us, telling the story of our Savior through music.

Two years before, I would have been excited for that moment, but not shocked by it. But one year before—an Easter I spent only with close family, having not seen friends in a month—I would have been cautious to hope for our performance to actually happen. I gained a little of that hope when I first arrived at Hillsdale.

I remember my first choir practice in the fall. I walked in ever-so-slightly late, having lost track of time with my first Western Heritage writing assignment. Once I found my place among the other altos, I looked around. I wish I could say that I was surrounded by friendly faces, ready to sing. Although I’m sure I was in spirit, in reality, I had no idea. Almost everyone was masked up, seated apart from each other. Only every other pew was occupied, with space between the singers. We were together, but still so far apart. It wasn’t normal. That practice, and for many after that, we listened as Professor Holleman drilled his speech into our heads. We knew we were lucky to be singing and that most college choirs were not. And every week, we got the message that we needed to be careful to stay healthy and to put others first.

I also remember the day I learned I would not get to be part of an age-old tradition: Messiah every fourth Christmas. As Covid took its toll on the Hillsdale campus, it was just too hard for choir and orchestra to try to stick to its plan. We singers would most likely not be allowed to sing without masks and would doubtless be missing people from our ranks when it came time to perform. Additionally, we were not making the progress to learn the movements as rapidly as we would have liked. Professor Holleman gave us a choice: perform a shortened version of Messiah, or wait. We chose to wait.

There was little sadness that day, but rather excitement and even anticipation. We still had the promise of a full Messiah performance in view. True, we would not be reproducing an old tradition. But we would have it our own way: we would tell the story of our Savior’s coming, death, and resurrection at Easter, the time when it was originally meant to be performed. We closed our Messiah scores and accepted new pieces of music as they were handed out, still planning for a Christmas concert of some carols and pieces of music the choir had been working on when everything shut down in spring of 2020.

As it turned out, we didn’t get to do that either. I left Hillsdale for winter break after a semester in choir having yet to perform. When we came back in 2021, it was a new year, with some new choir members joining us. It was time to fulfill an old ambition.

We worked hard on the familiar movements from the fall and on some new ones. I and a fellow alto I affectionately call my “choir buddy” would go find a piano in the music building to practice rhythms. Eventually, the choir moved from singing in the chapel pews to setting up on the stage. We got to practice with the orchestra, and excitement mounted.

Two semesters worth of work led to the weekend after Easter. Finally we were getting to perform! We were ready—we knew we had two sold-out performances, one on Friday and one on Sunday. We knew our music. (At our last practices, Professor Holleman could just walk away from conducting during the “Hallelujah” chorus, and we would be fine!) For those of us in the main choir, we had thirteen of the fifty-three movements to sing on. We had heard the soloists, and knew the crowd was in for a treat.

Choir and orchestra members, myself included, had family arrive to see our big days. Sitting up on that stage with the people who had been on this journey with me, I was satisfied. Yes, I was scared of making mistakes but also excited to finally see this through to conclusion. But for my first choir performance at Hillsdale, I was most glad to just see that we made it. Even if we had to wear masks in practice, making it so difficult to hear each other, even if we had to wait an extra semester, even if we had to face the pressures from the outside world saying it was irresponsible to perform for a large audience, we were here. That spoke to the spirit of my classmates. We had been challenged, and we had conquered.

I could feel our victory from my seat in the front row, third from the right. 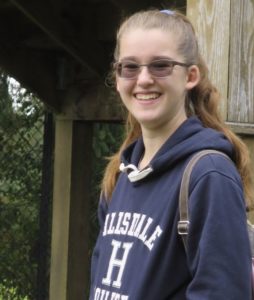 Victoria Kelly, ’24, is a proud country girl from upstate New York. On the rare occasion she is not studying or hanging out with all her favorite Hillsdale people, you can find her debating politics, practicing Tae Kwon Do, or swing dancing, preferably outside under the stars.